Some time ago, in the middle of the winter, we decided to go hiking in the Romanian mountains (Carpathians) during the weekend, accompanied by two other friends. I had been on the Prahova Valley in Romania (National Road 1) many times, but my attention had always been turned to the Bucegi Mountains, which are more famous and offer more hiking trails. On the other side of the road, there is another mountain chain, which compared to Bucegi looks more like a hill, Baiu Mountains. In the summer, you can ride a bike on those mountains’ ridges or drive an ATV or an off-road motorcycle. But in winter, the trails are covered with a thick snow layer. 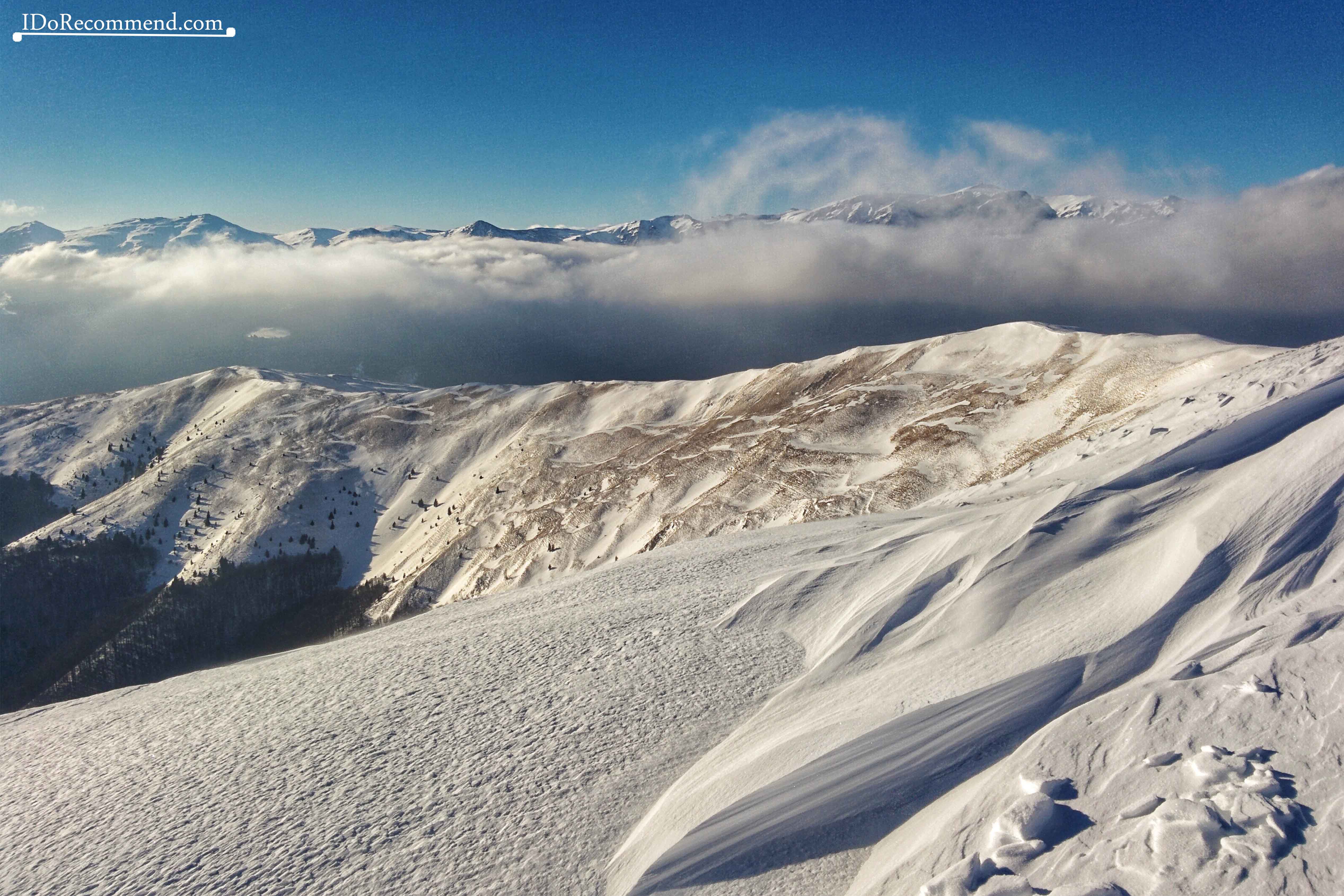 The guys did a research and planned the trip. This was the itinerary: 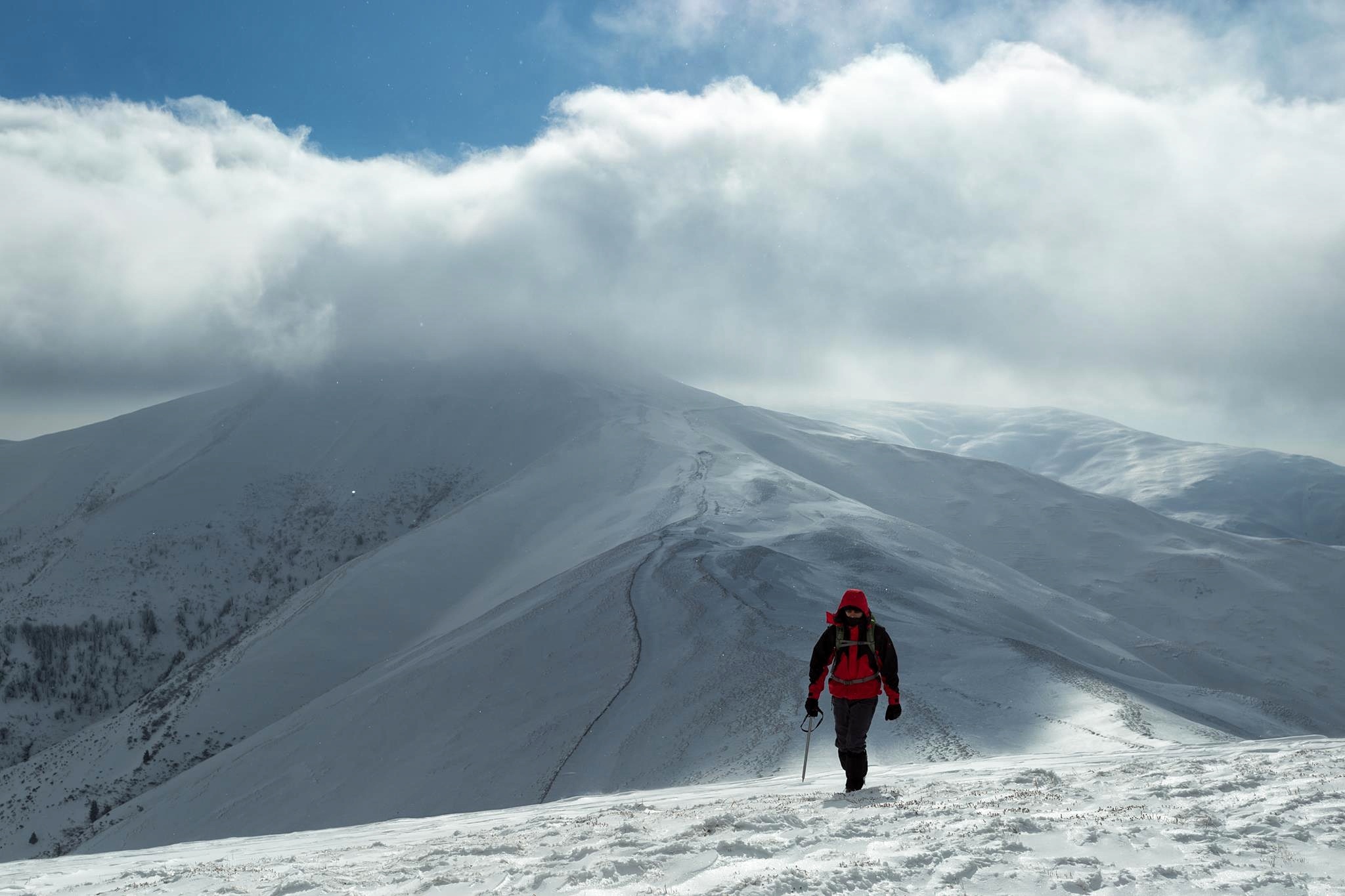 The trail itself is not very difficult. The Baiului Ridge is wide, the path climbs uphill, goes downhill and so on, with areas which are not steep. During summer and good weather the trail takes around 6h at normal pace. In the winter, however, things change dramatically. Because of the snow and the cold weather, it took us about 10 hours. 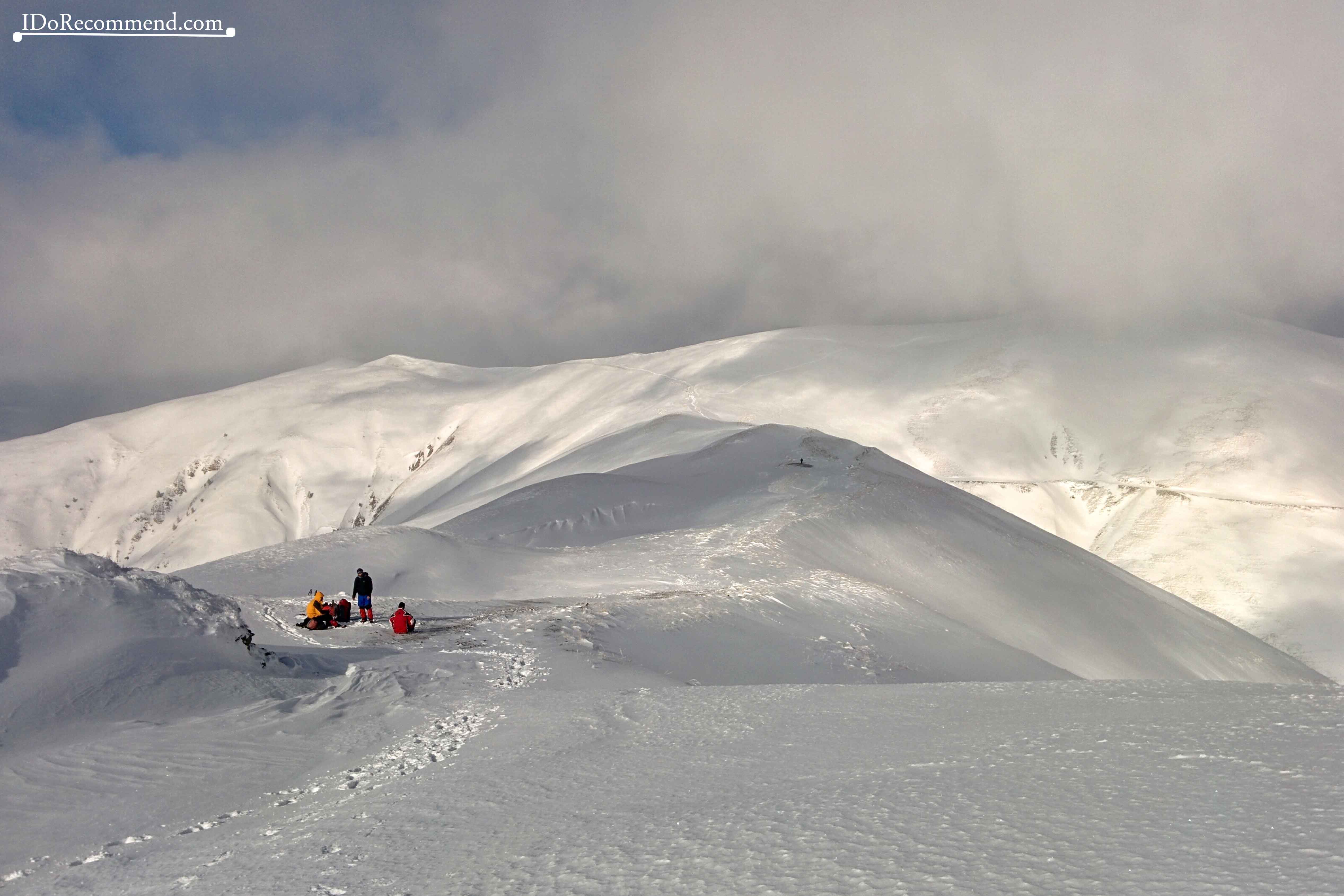 We were lucky to have good weather, with a blue sky all day long, otherwise it would have been very difficult to see the markers. They were often covered by snow, and the trail was not distinguishable because of the blizzard. In addition, there are not a lot of people on that route during the winter. However, it’s pretty intuitive to follow the trail in good visibility conditions. 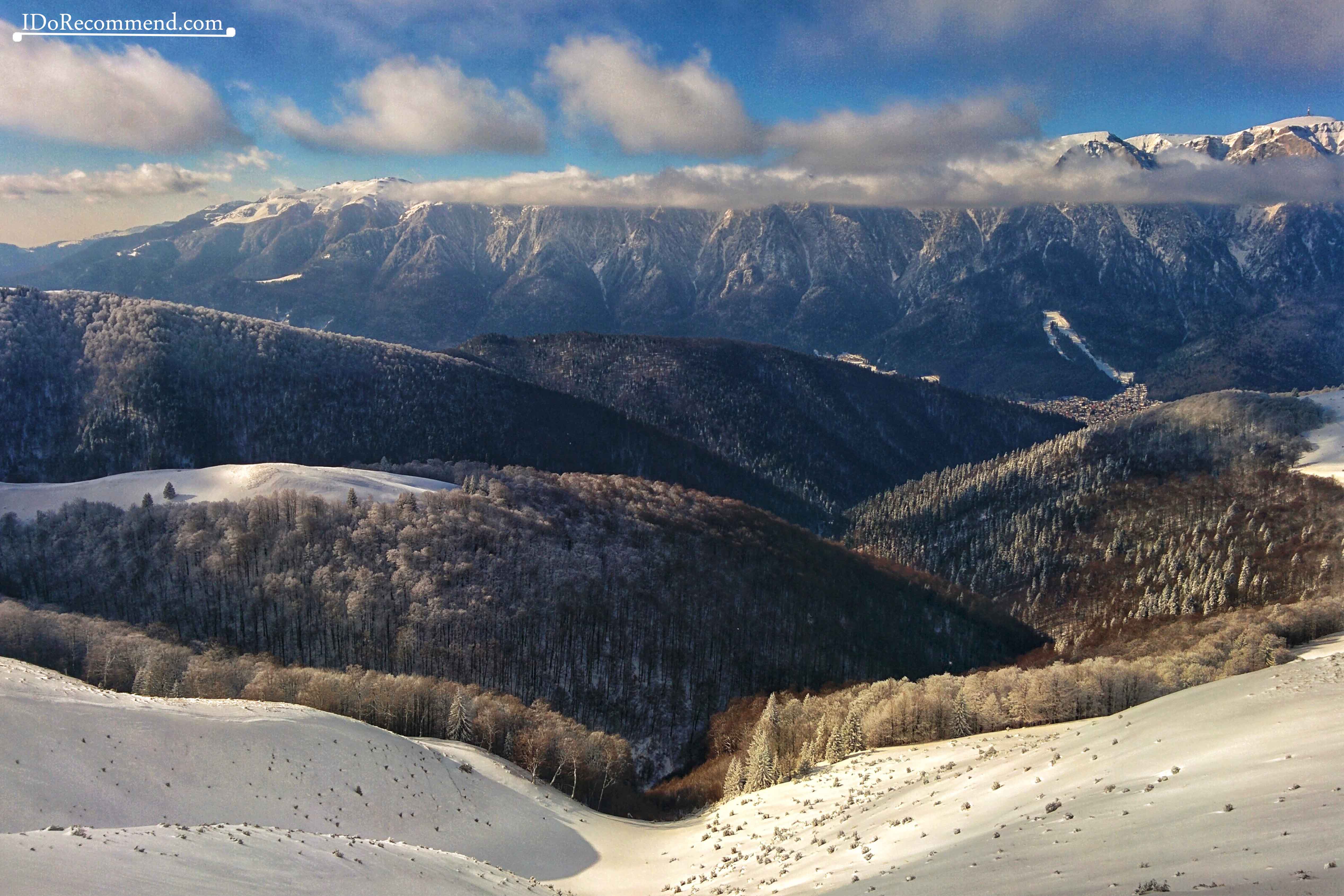 Bucegi Mountains on the horizon

I had never encountered winds as strong and cold as those that day. The real feel temperature was probably lower than -10 degrees Celsius and there was no place to hide from the wind. If I had taken my gloves off for a few seconds, my hands would have frozen instantly. The challenge was when we stopped to eat something, but the energy supplied by the food, helped me a lot to withstand the cold. Besides, the views all around us were stunning.

On the one hand, I was glad it was so cold because the snow was hardened and it was easy to move forward without getting stuck in it. On the other hand, right at the beginning of the trail, just after the cable car terminal station, I climbed with difficulty because of the steep path. The trekking poles helped a lot though. 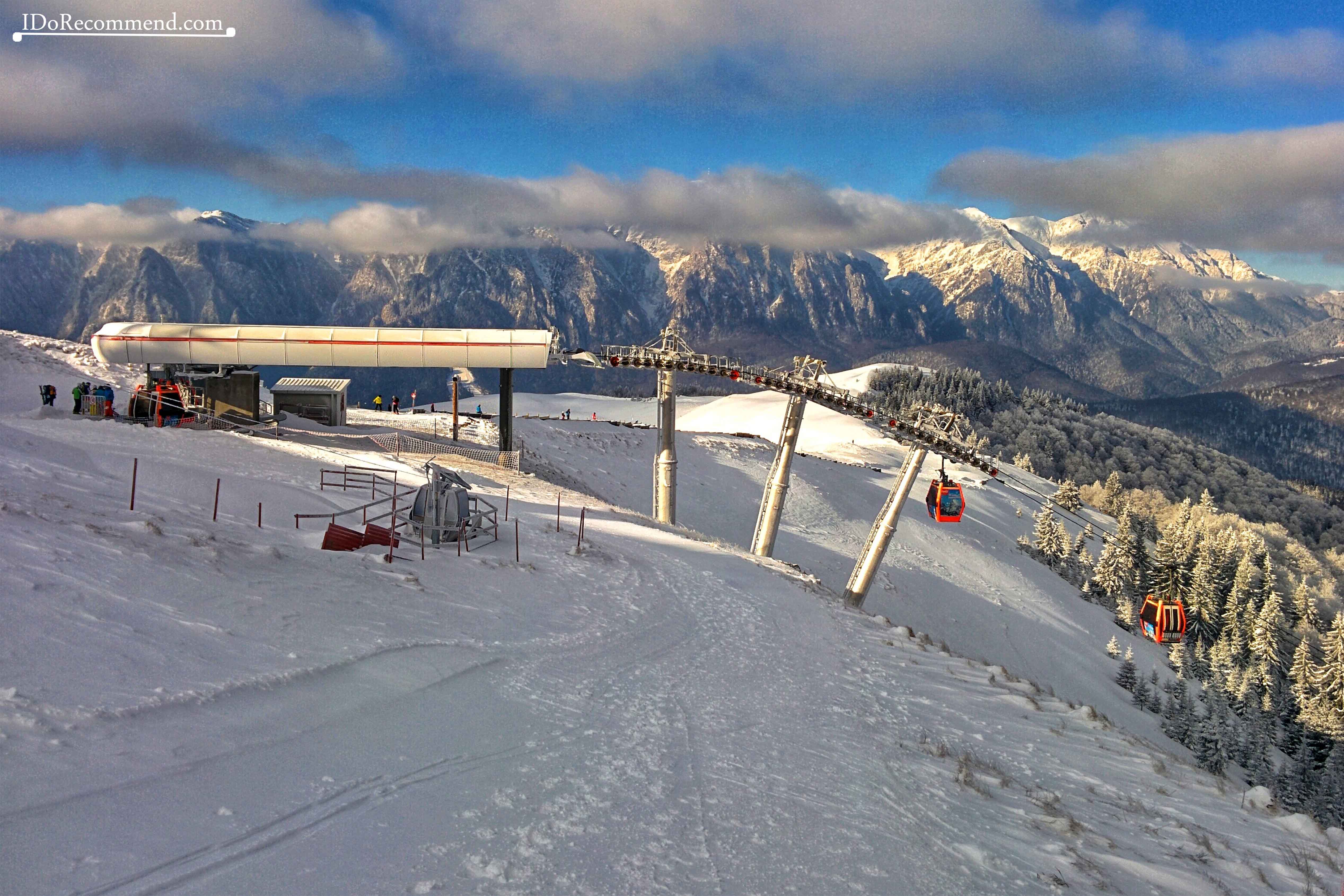 The most beautiful moment of that day was close to Piscul Câinelui peak at sunset. On one side there was the SUN like a small fireball hiding behind the mountains, and opposite to it, there was the great MOON, that was taking over the sky. I had never seen a full moon on the sky at the same time with the sun. 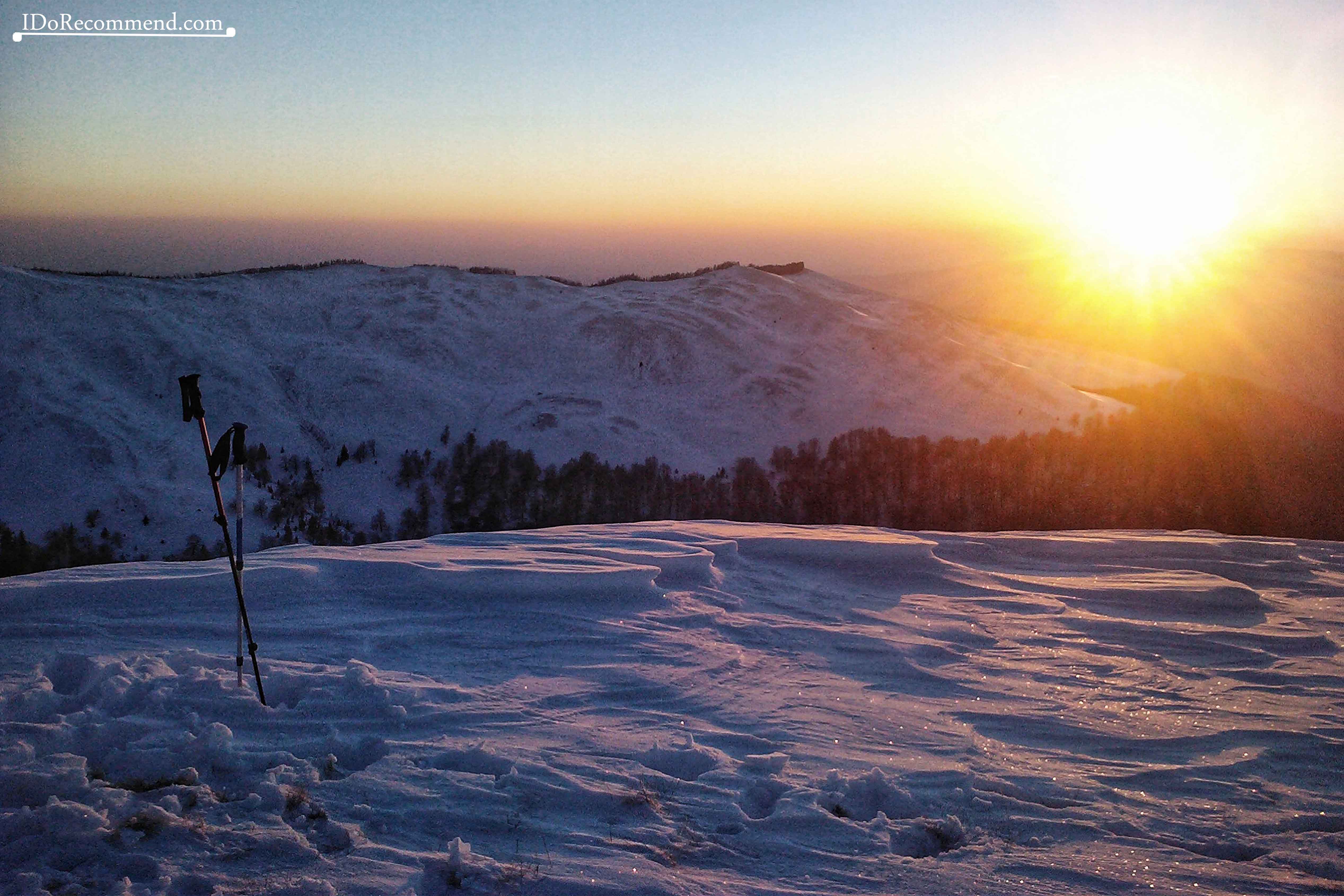 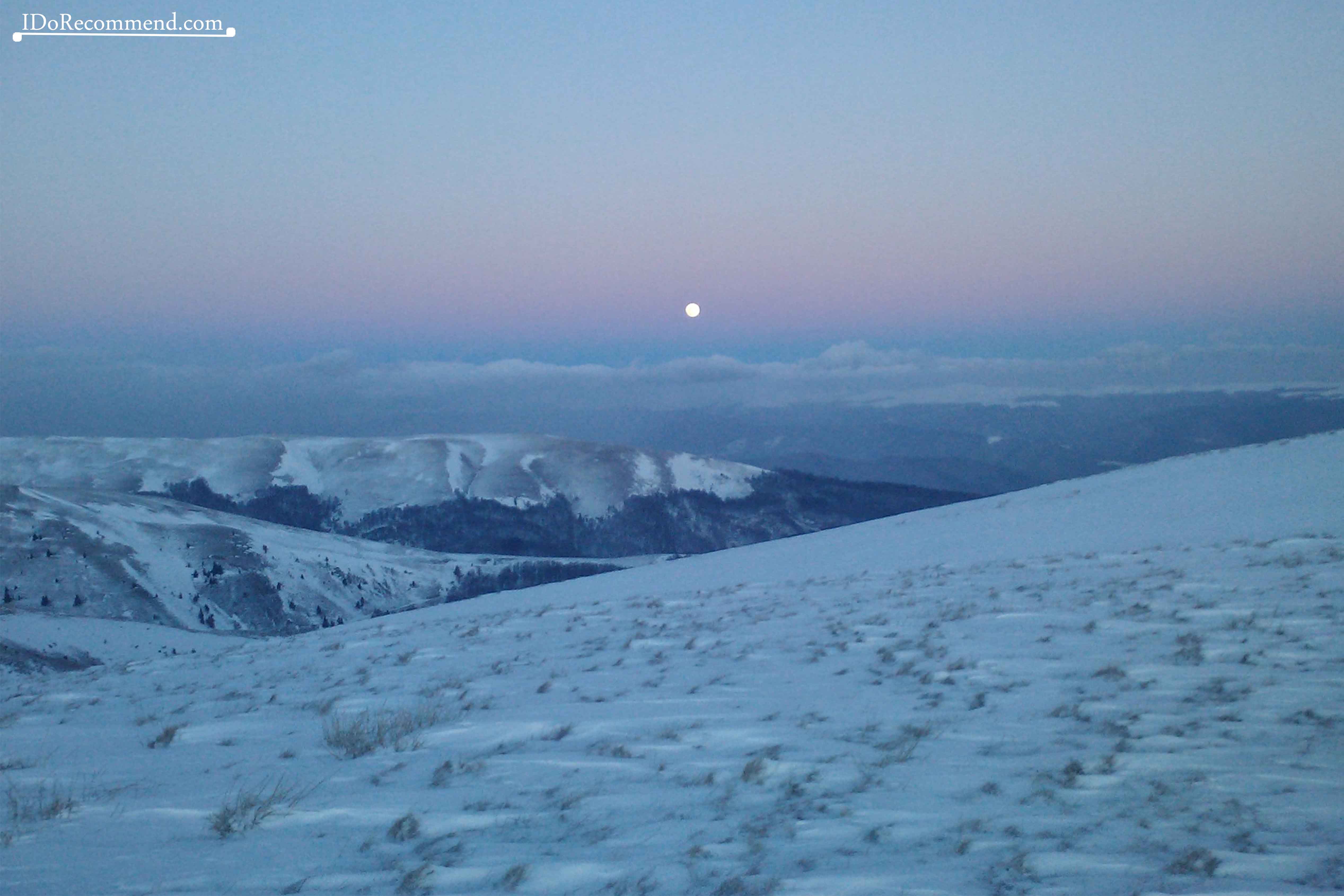 As the night was coming, the stars began to be our lanterns. On the mountain’s ridge, the snow was shinning under the moonlight and it almost felt like daylight. We only used the headlamps late in the night, when we entered the forest, close to Sinaia city. The atmosphere really gave us a state of peace and made the fatigue go away. 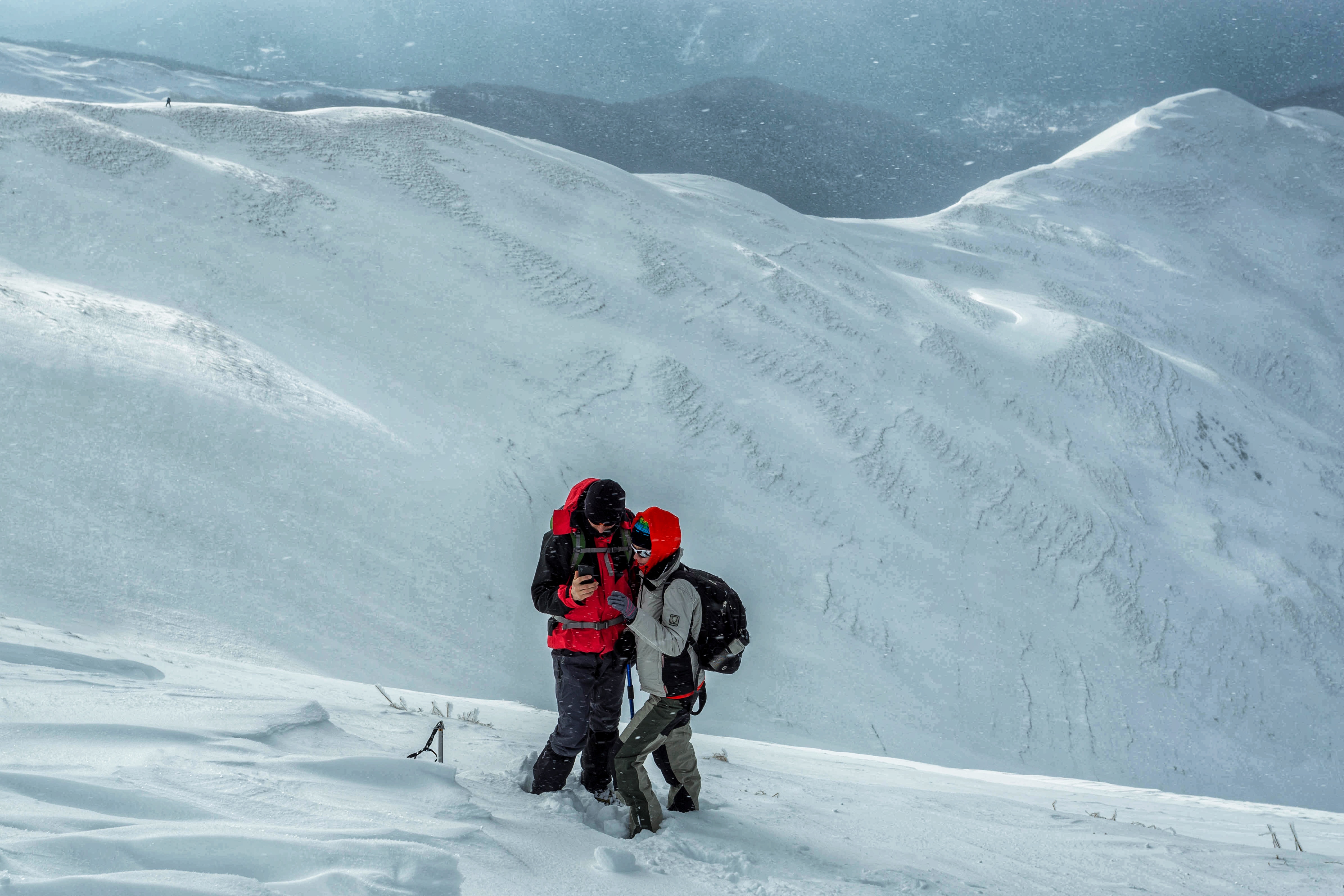 Due to the prolonged exposure to cold weather and the long track, that was the most difficult winter hike for me up to that moment, but also the most beautiful at the same time. I had never been in the middle of a perfect, unspoiled snow “ocean”, shining wonderfully under the sun’s rays.

In Sinaia, we got a taxi cab, that took us back to our car parked in Azuga. From there, we got to Poiana Marului in about an hour. In order to get to the Inima Carpatilor guesthouse, we had to deviate from the main road and climb a steep ramp which was covered in snow. As we didn’t have a 4 wheel drive car, we got stuck about half way there. The wheels were spinning in the snow and we couldn’t advance anymore. The Guesthouse’s owners offered to come get us with their car. Me and the other girl accepted at once as we were tired and hungry. The guys, however, did not give up and after some struggling managed to install the tire chains and come to the pension with their heads up.

The owners awaited us with fresh warm homemade food – polenta with scrambled eggs and sausages. I hadn’t eaten polenta with such delight for a long time. It was absolutely delicious. 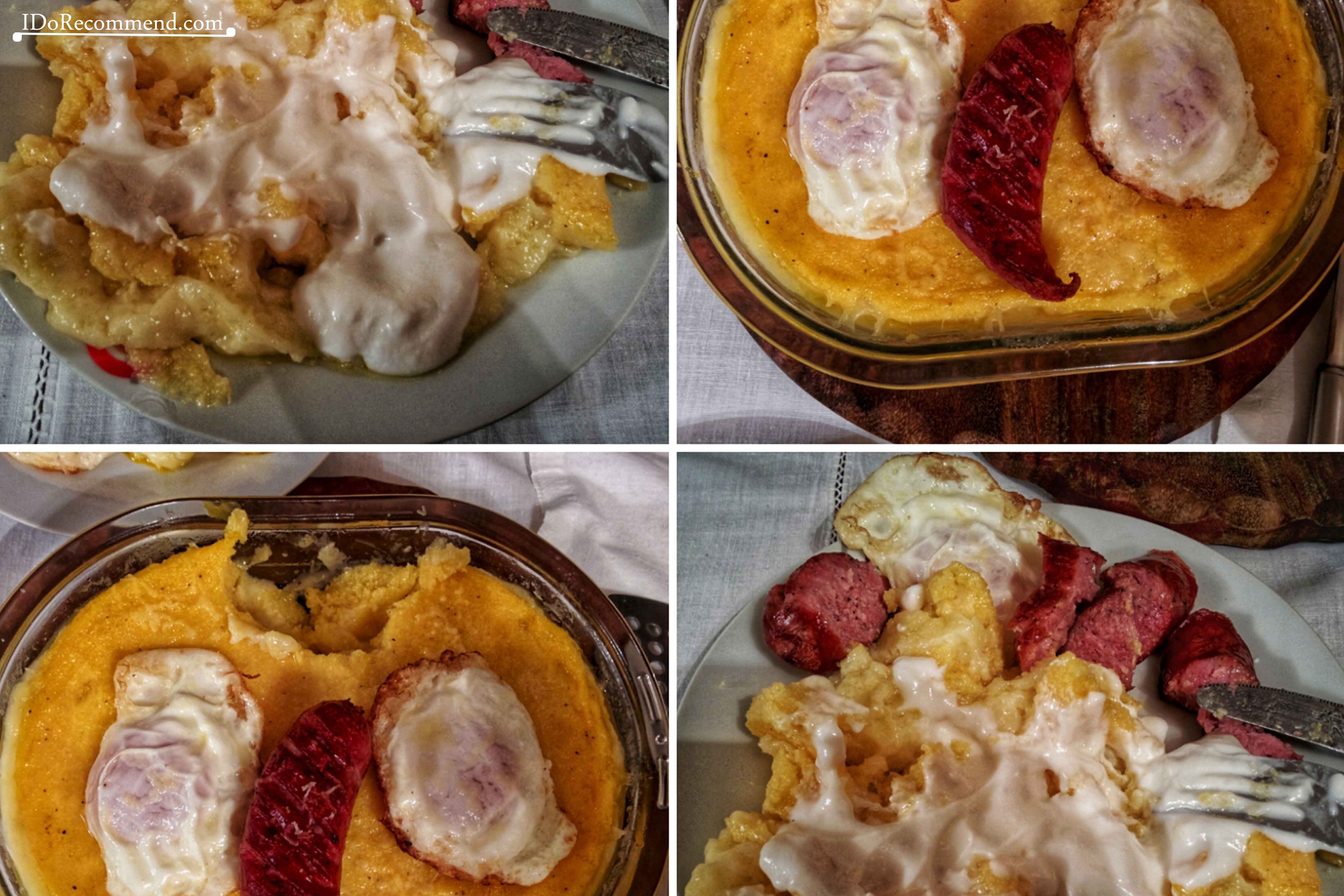 The following morning, I realized what a beautiful place we had really gotten to. The guesthouse was on top of a hill, surrounded by the Piatra Craiului, Bucegi, Fagaras and Magura Codlei mountains. The area was very quiet and we enjoyed the silence and had some active recovery after the previous hard day. We walked the empty streets and just admired the frozen nature. The sun was shining and the wind was gone. 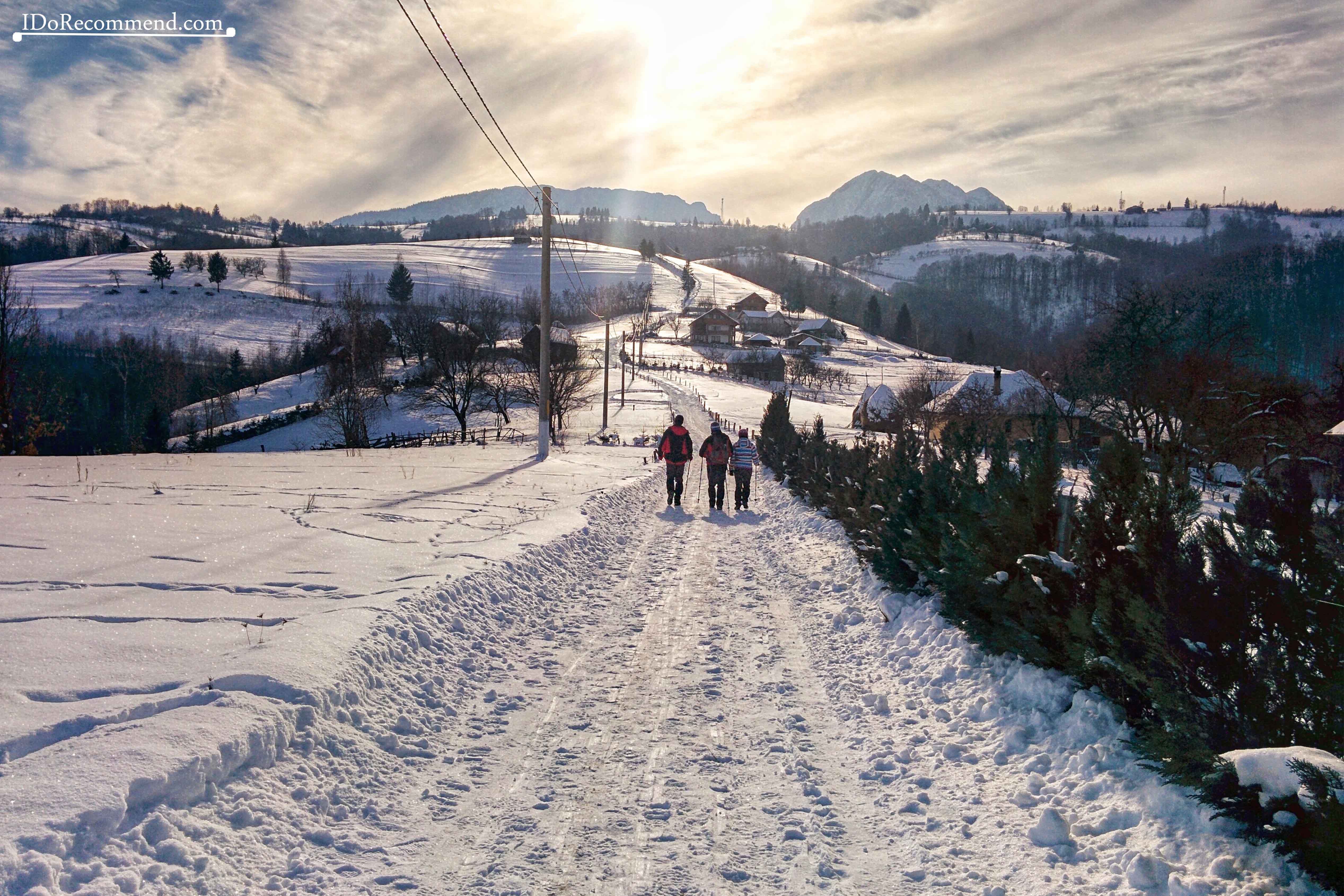 We also had a lot of fun riding the sledges downhill with speed just like we did in the childhood.

The weekend was about to end. After loading our bags in the car, we left regretting that we leave behind those fairy tale views, dreaming to come back one day. 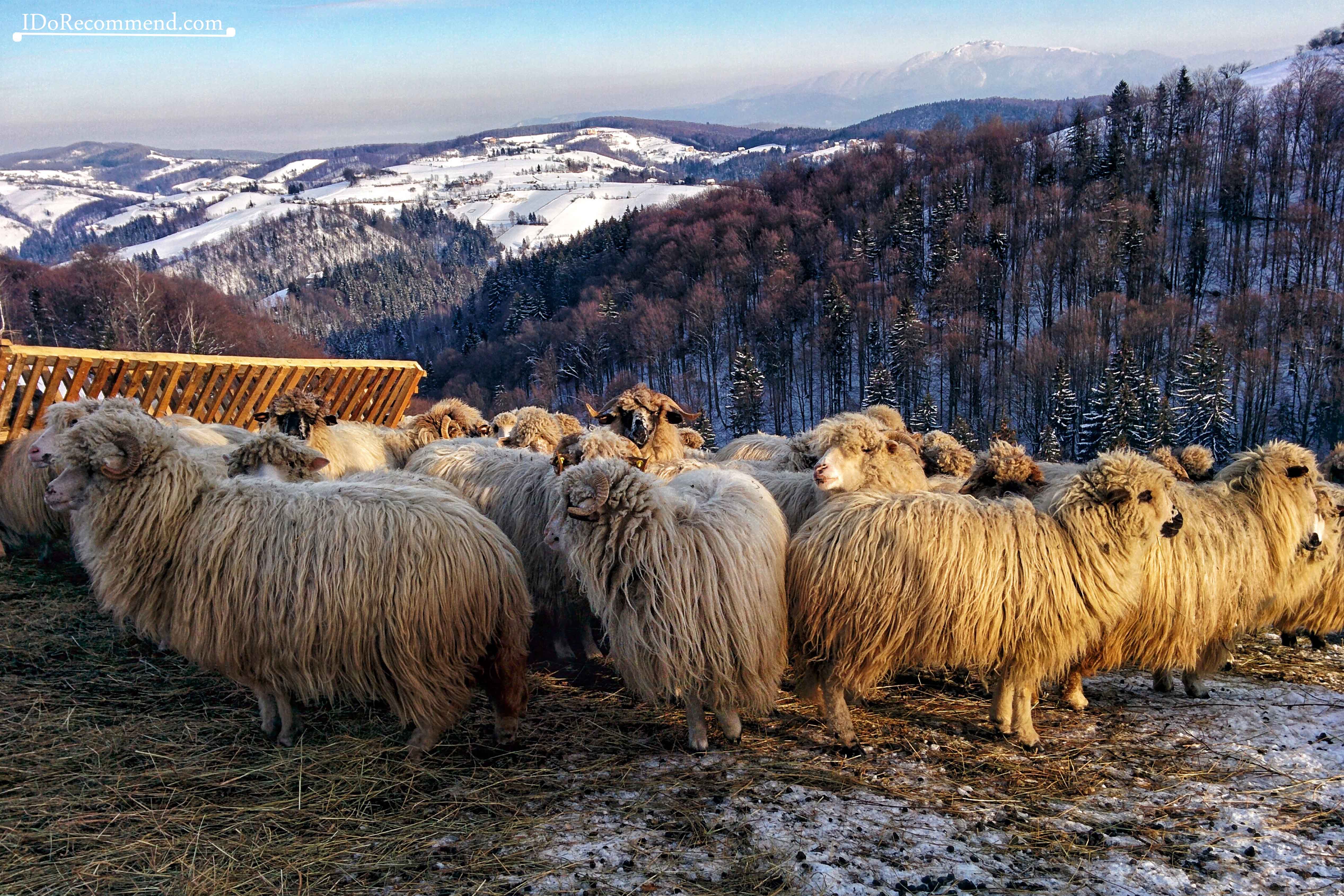 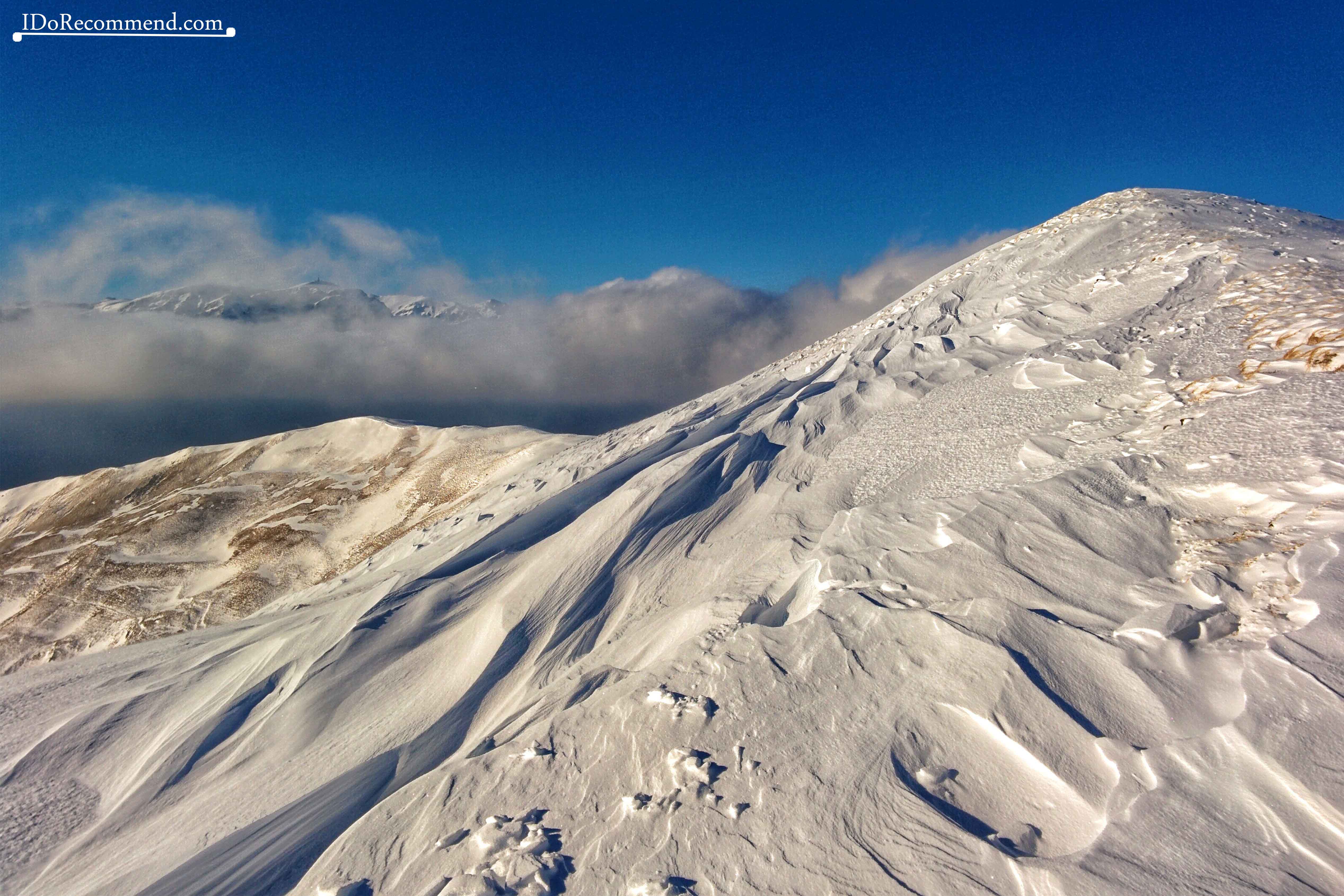 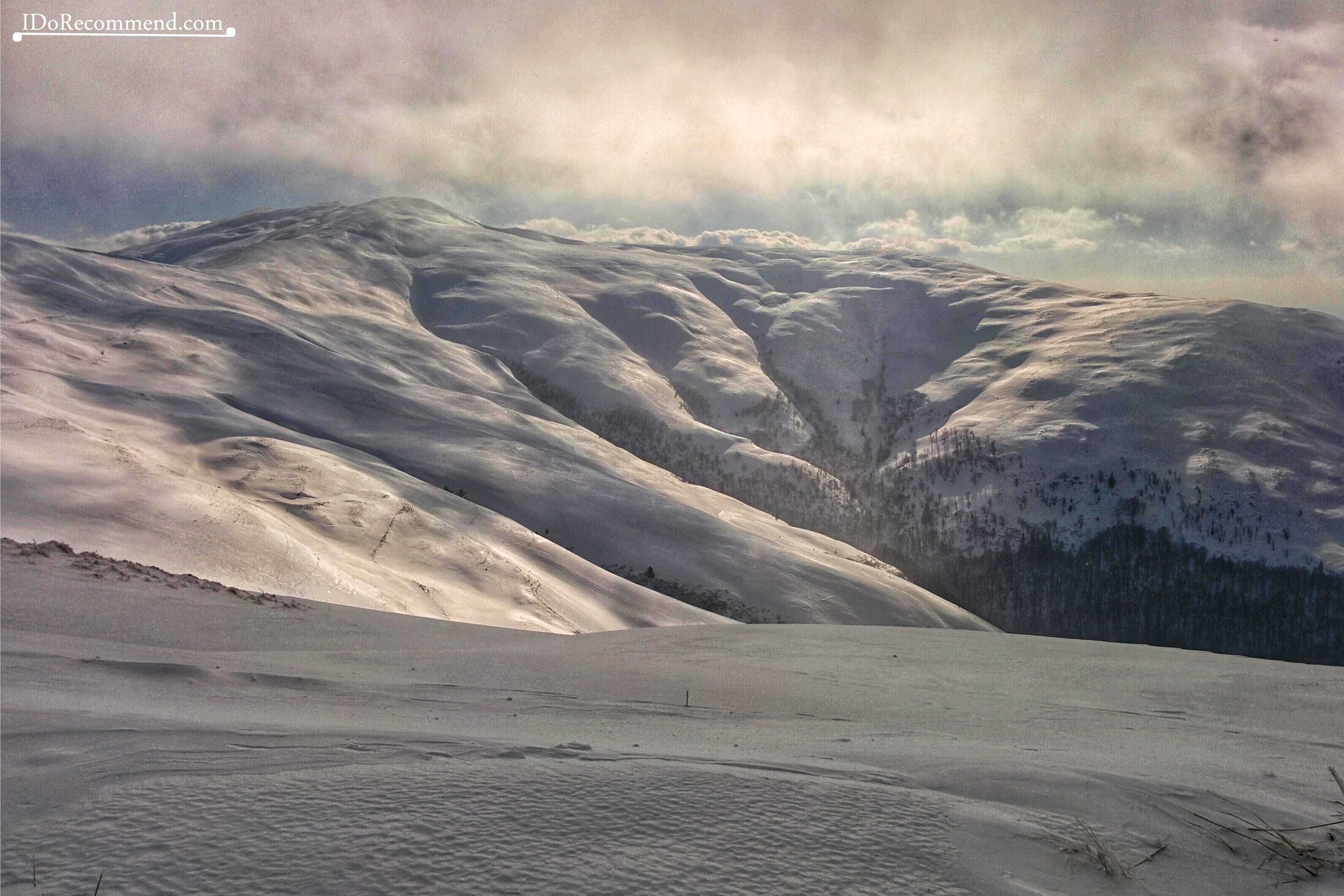 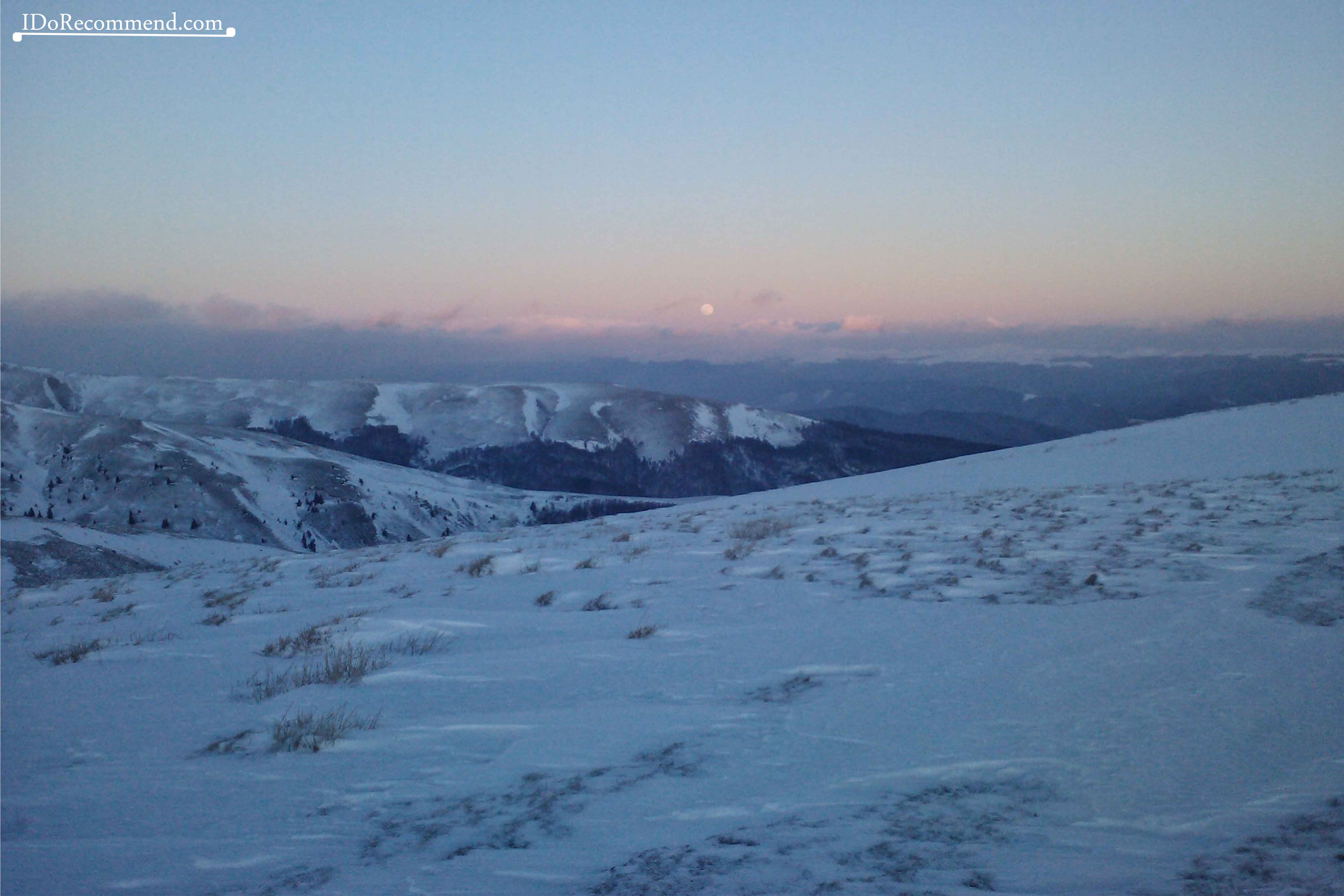 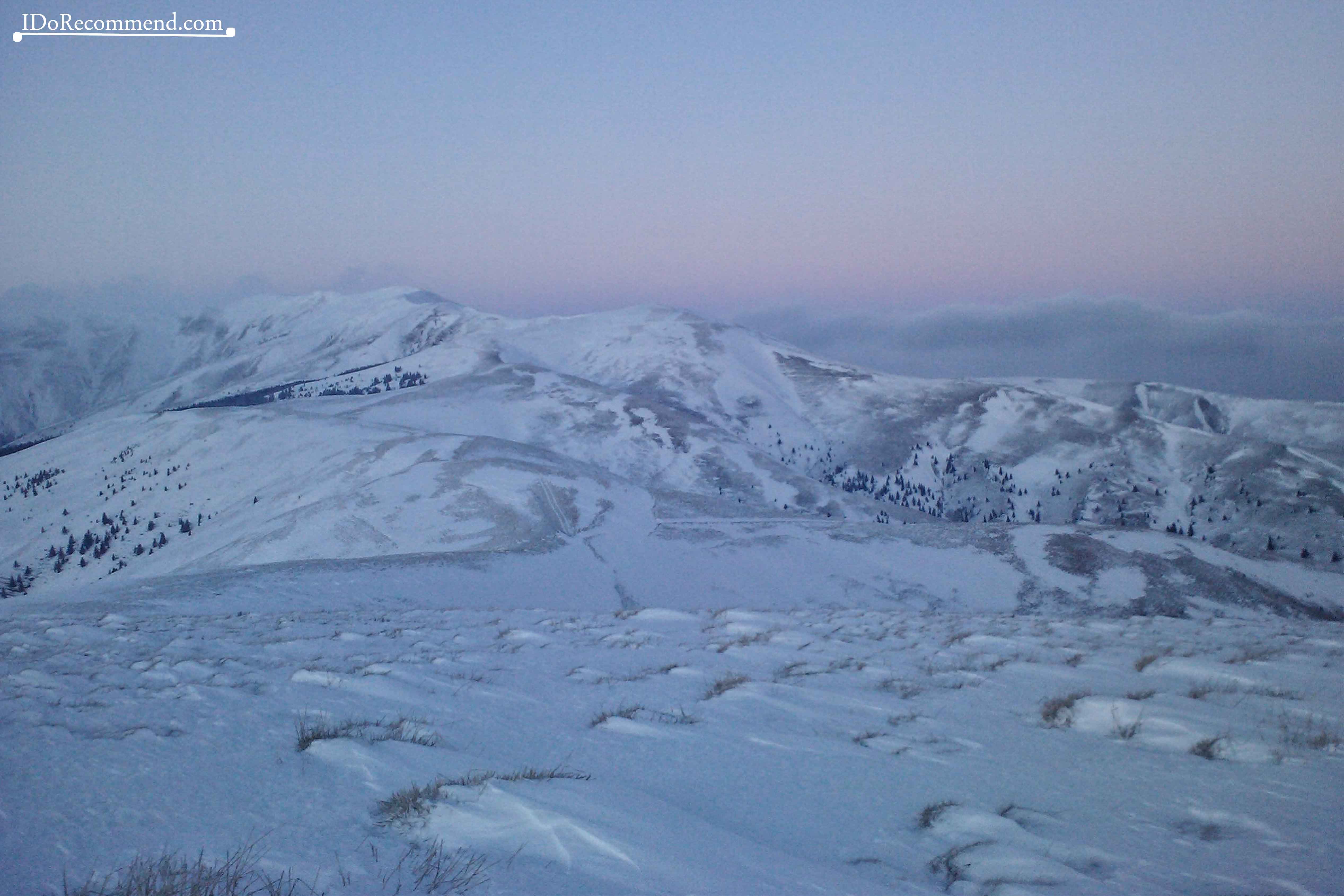 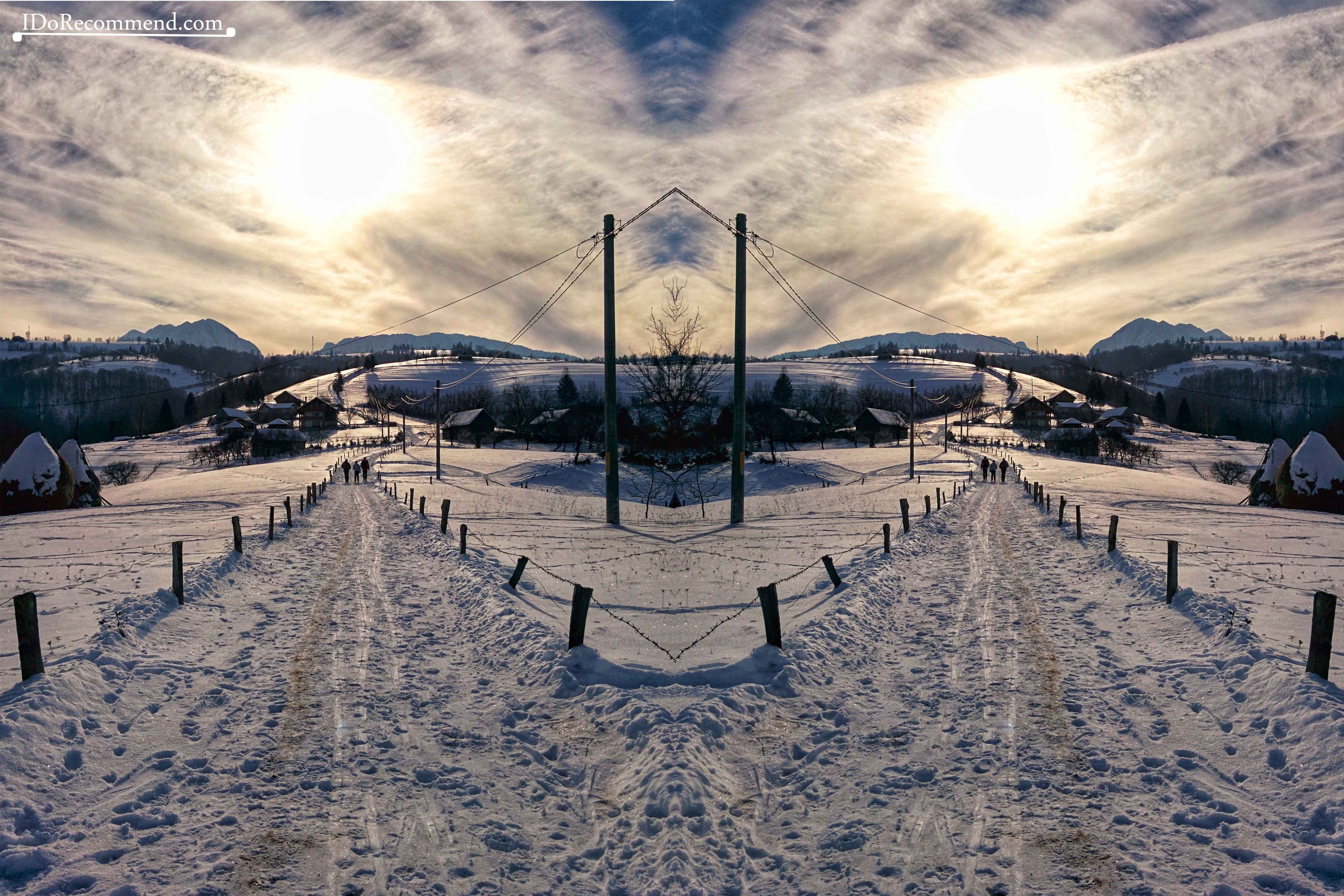 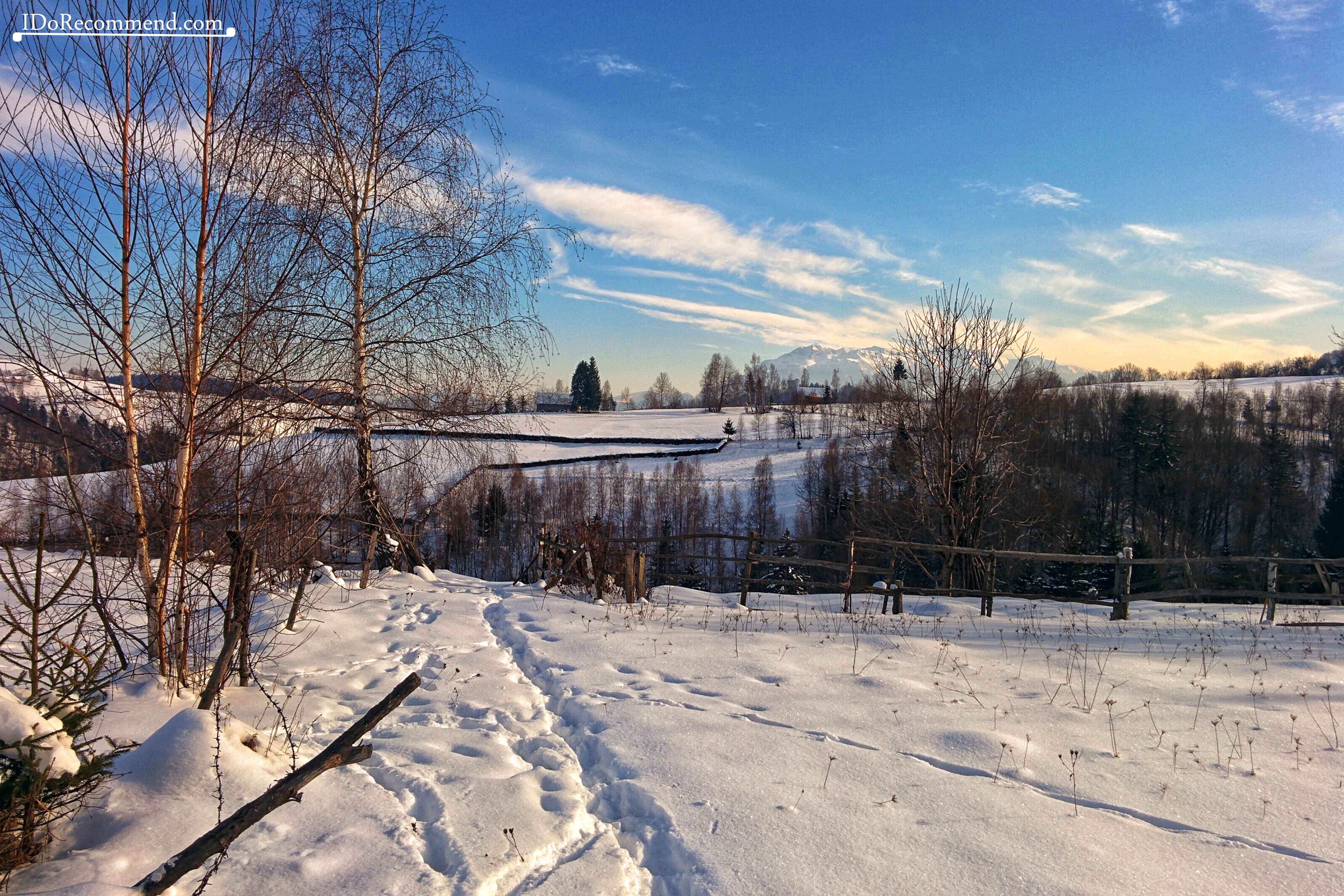 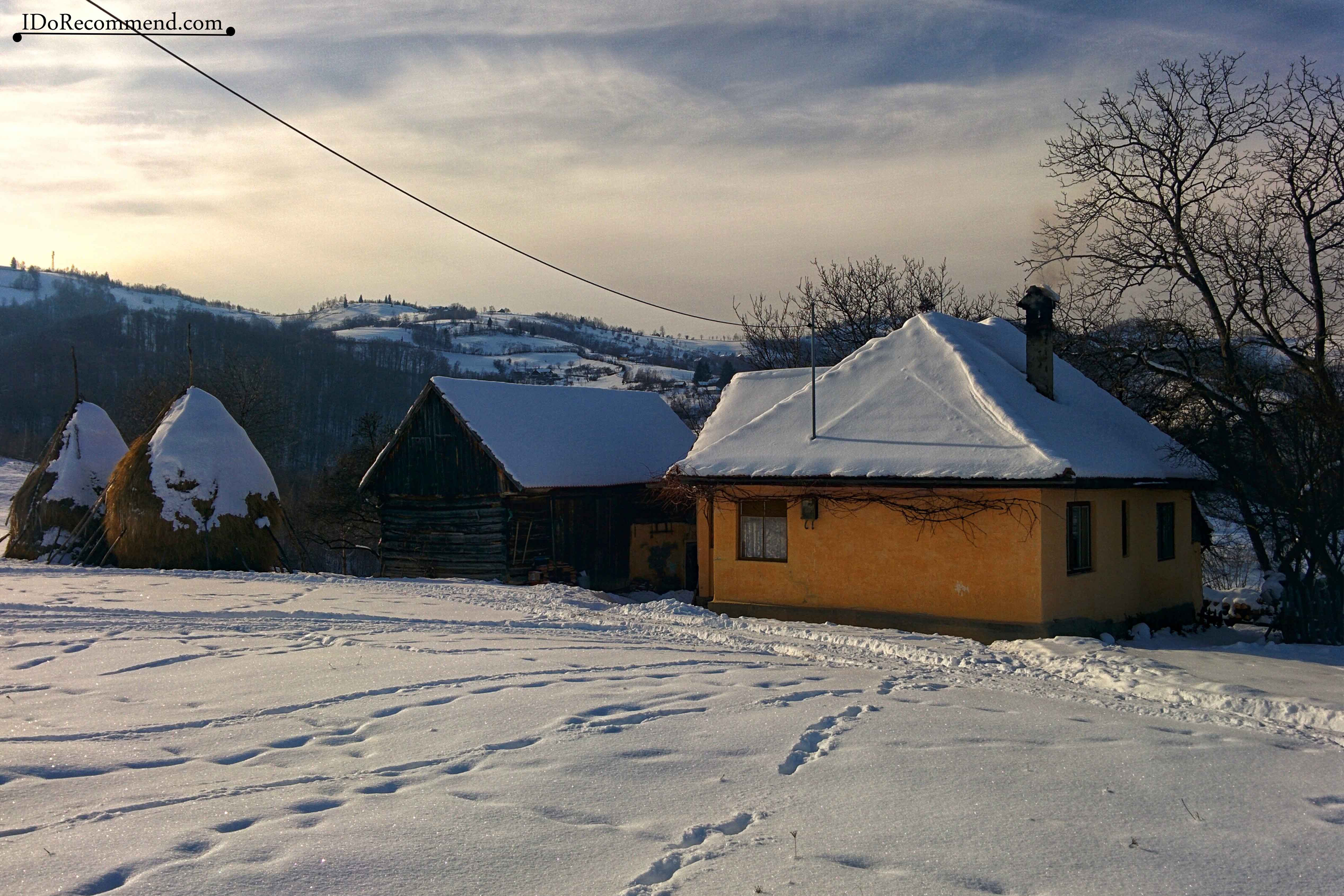 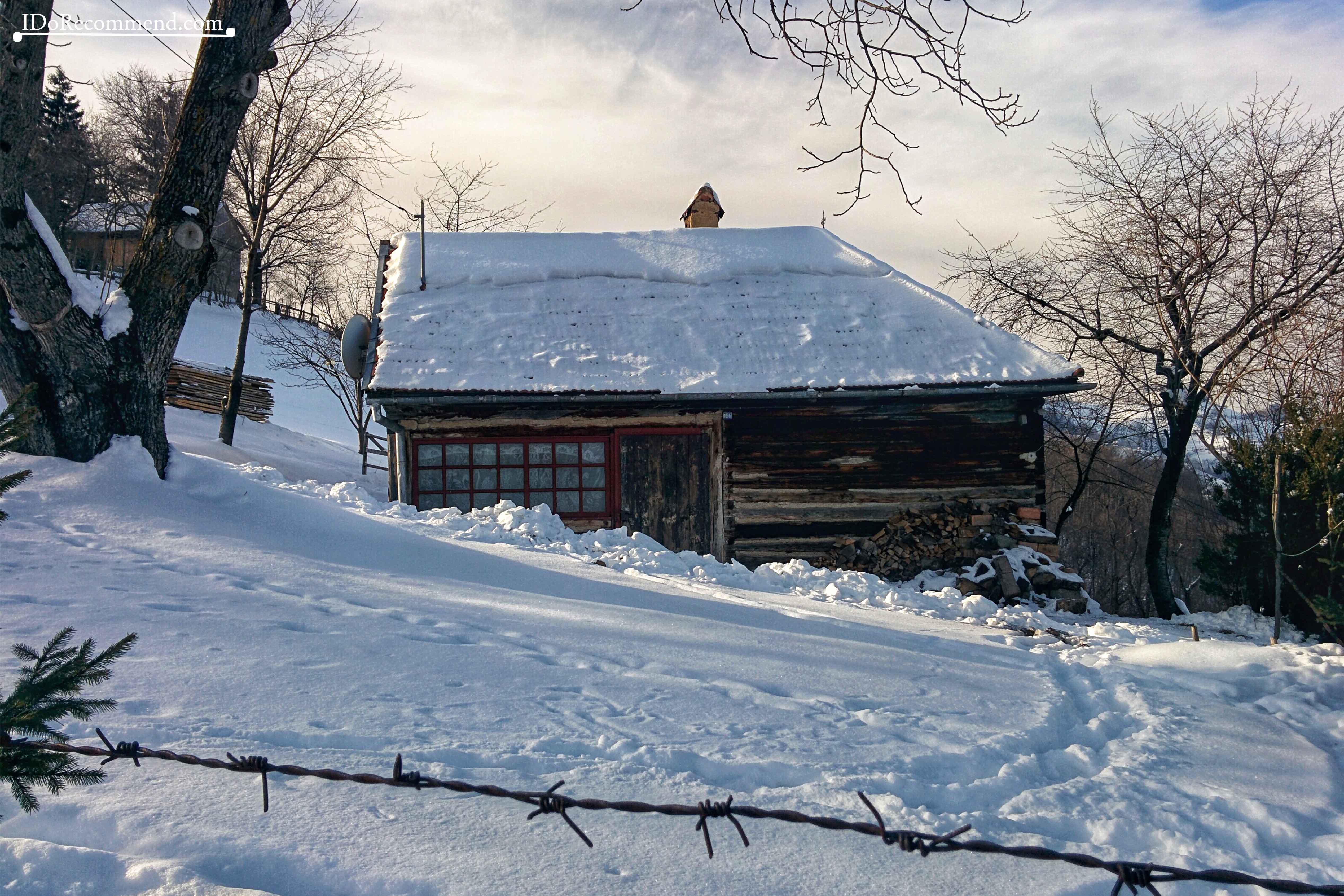 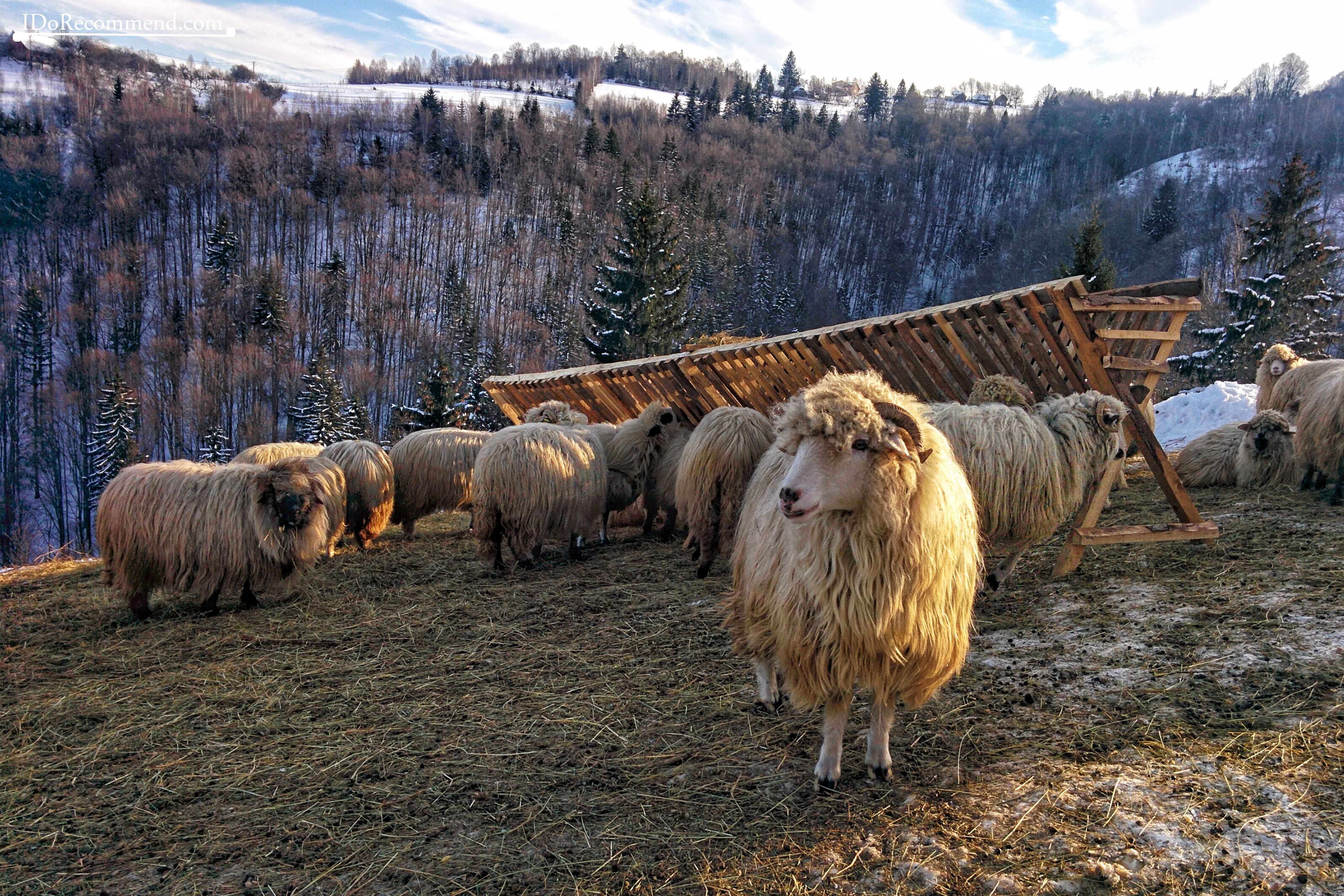 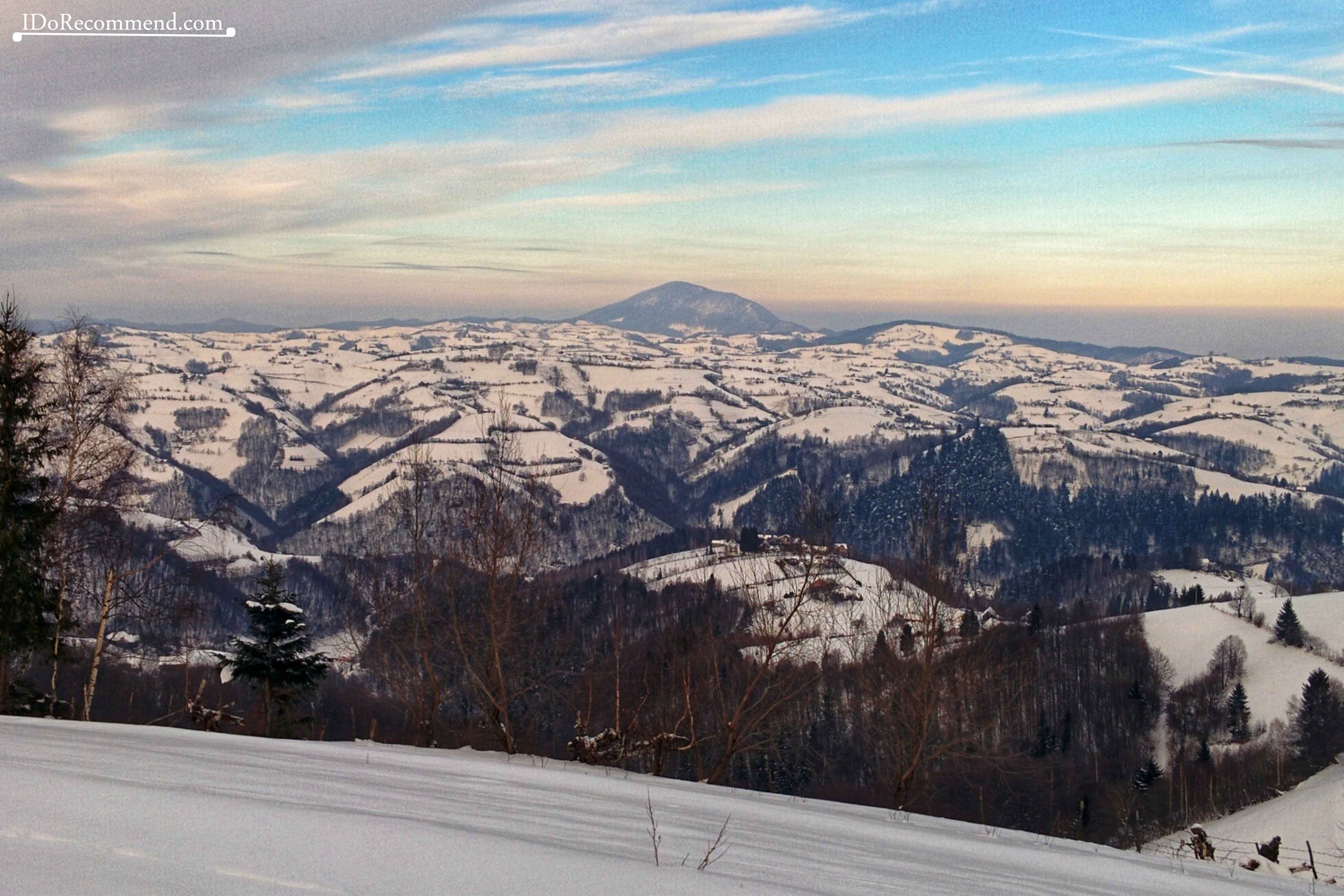 Keep on reading IDR’s articles to discover the amazing Romania and many other incredible places on Earth.