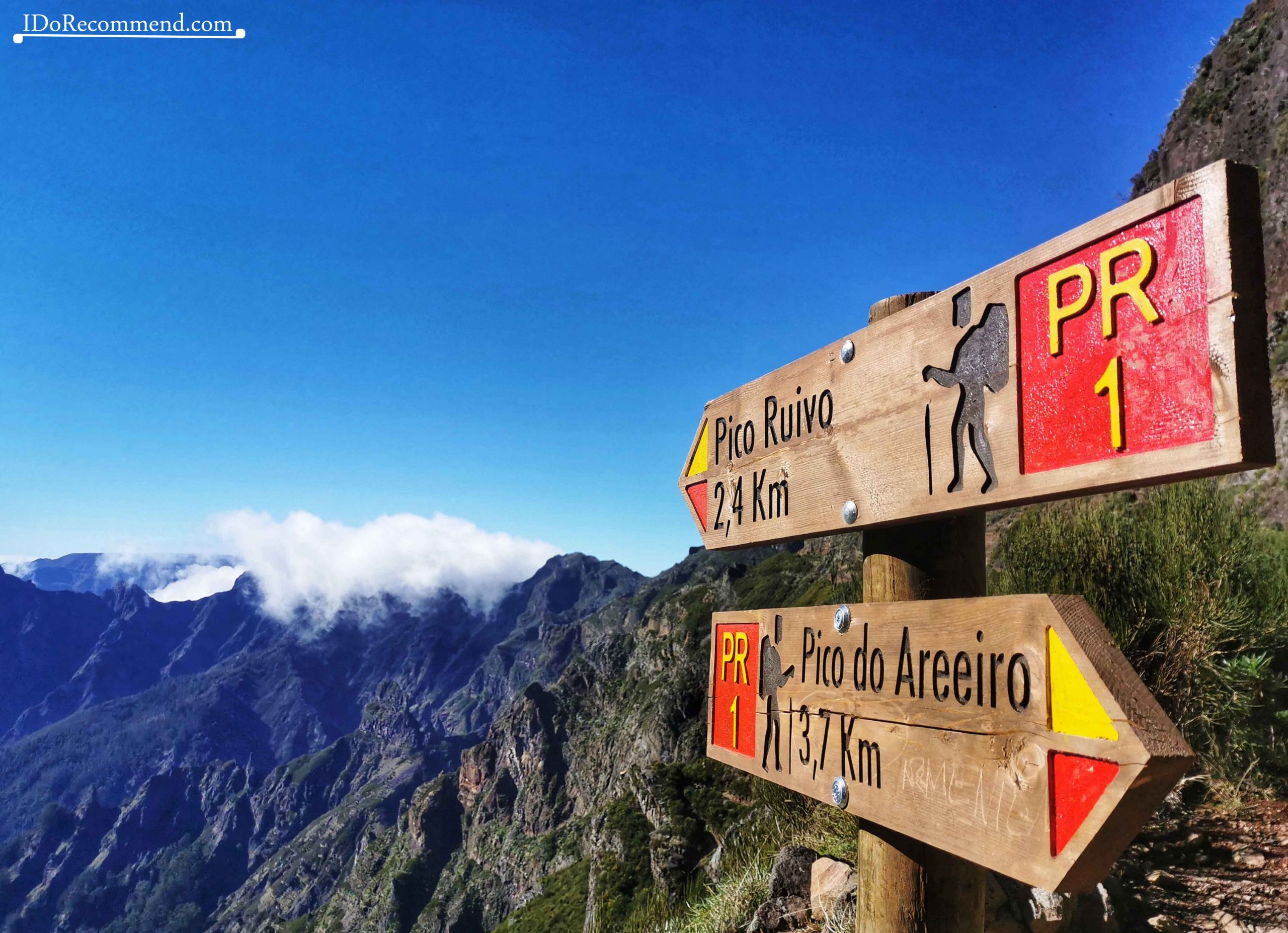 After passing by Monte, a suburb of Funchal, we arrived in an area where the trees had been affected by fire, then we reached Vereda do Areeiro around noon. We were above the clouds and we could see in the distance a wind farm perched on a mountain plateau. Many people say Vereda do Areeiro is one of the most spectacular places for watching the sunset. 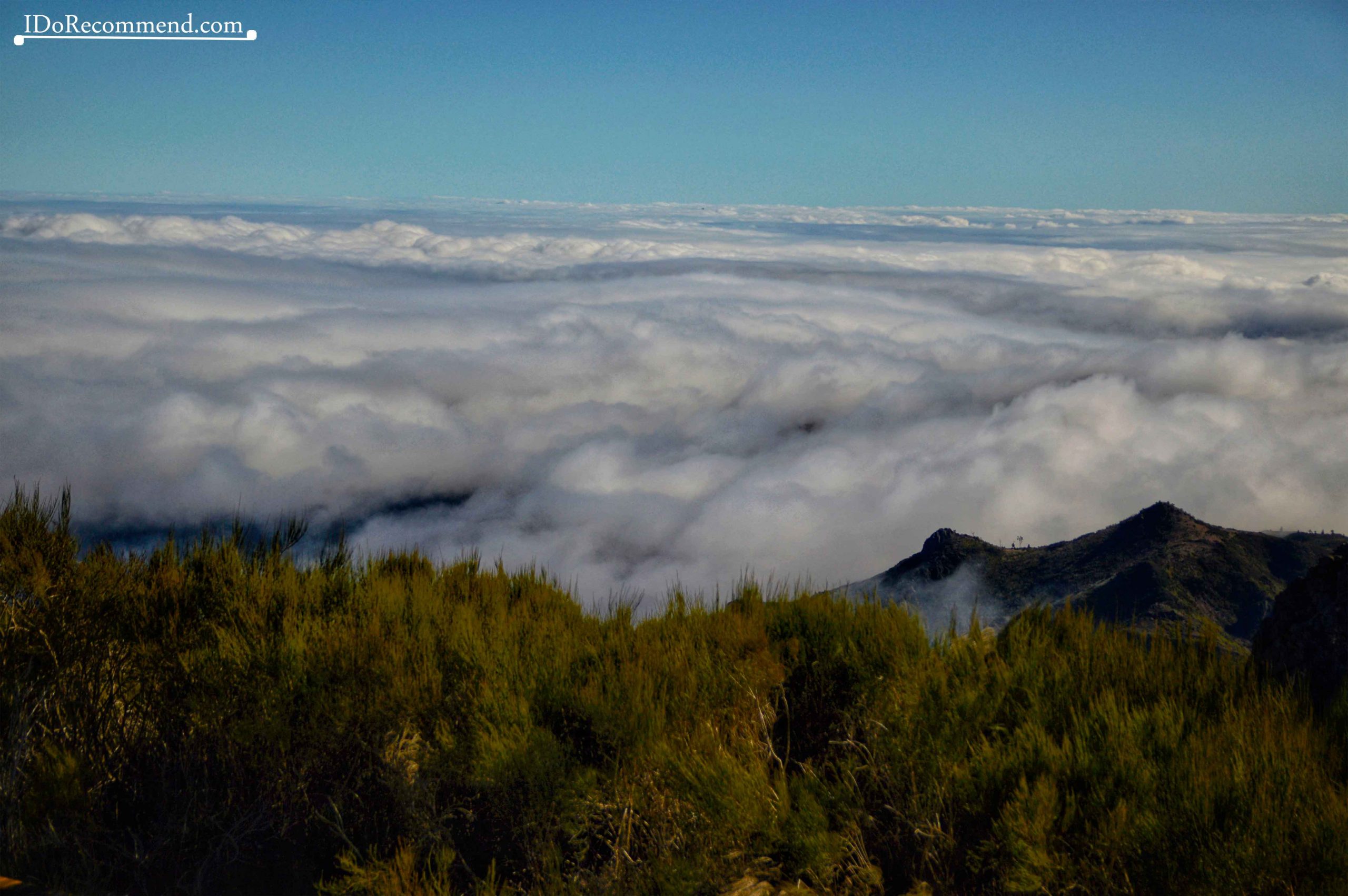 Above the clouds at Vereda do Areeiro 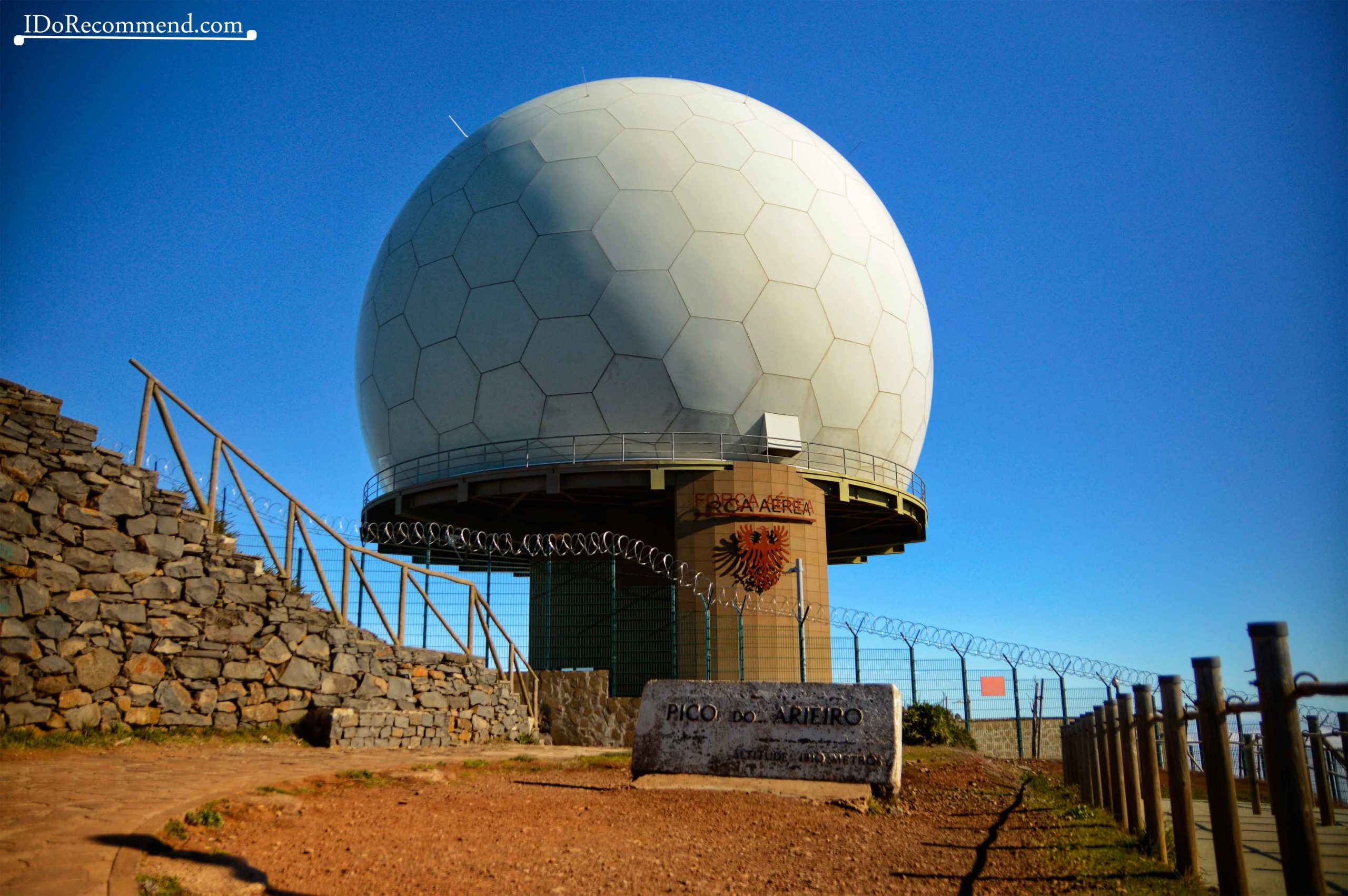 After parking the car near the radar station, we started hiking to Pico Ruivo. We chose the yellow route (O) which is more difficult, but shorter (6.1km/3.8mi) than the red one (E). In the beginning we stopped many times to take photos and admire the clouds that made their way through the sharp ridges and gorges of the mountains. 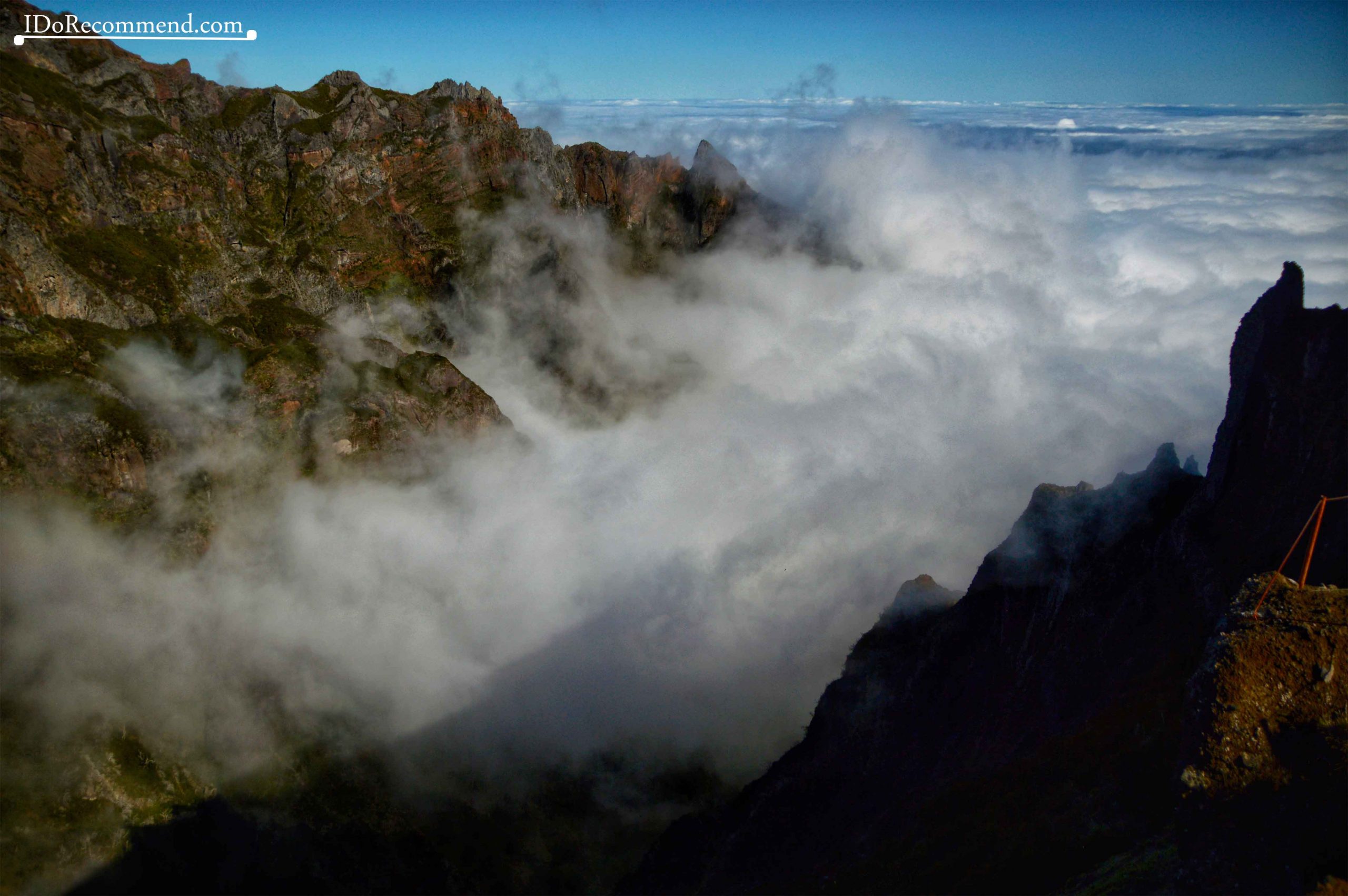 Above the clouds on PR1 trail

The trail is well-maintained and consists of numerous successions of steps (made of metal or stone), tunnels, ascents-descents. Inside the longest tunnels you might need a flashlight. In sunny weather the hike is not difficult. Yet, in rainy and windy weather, it might be a challenge because the stones are slippery and the wind could unbalance you. 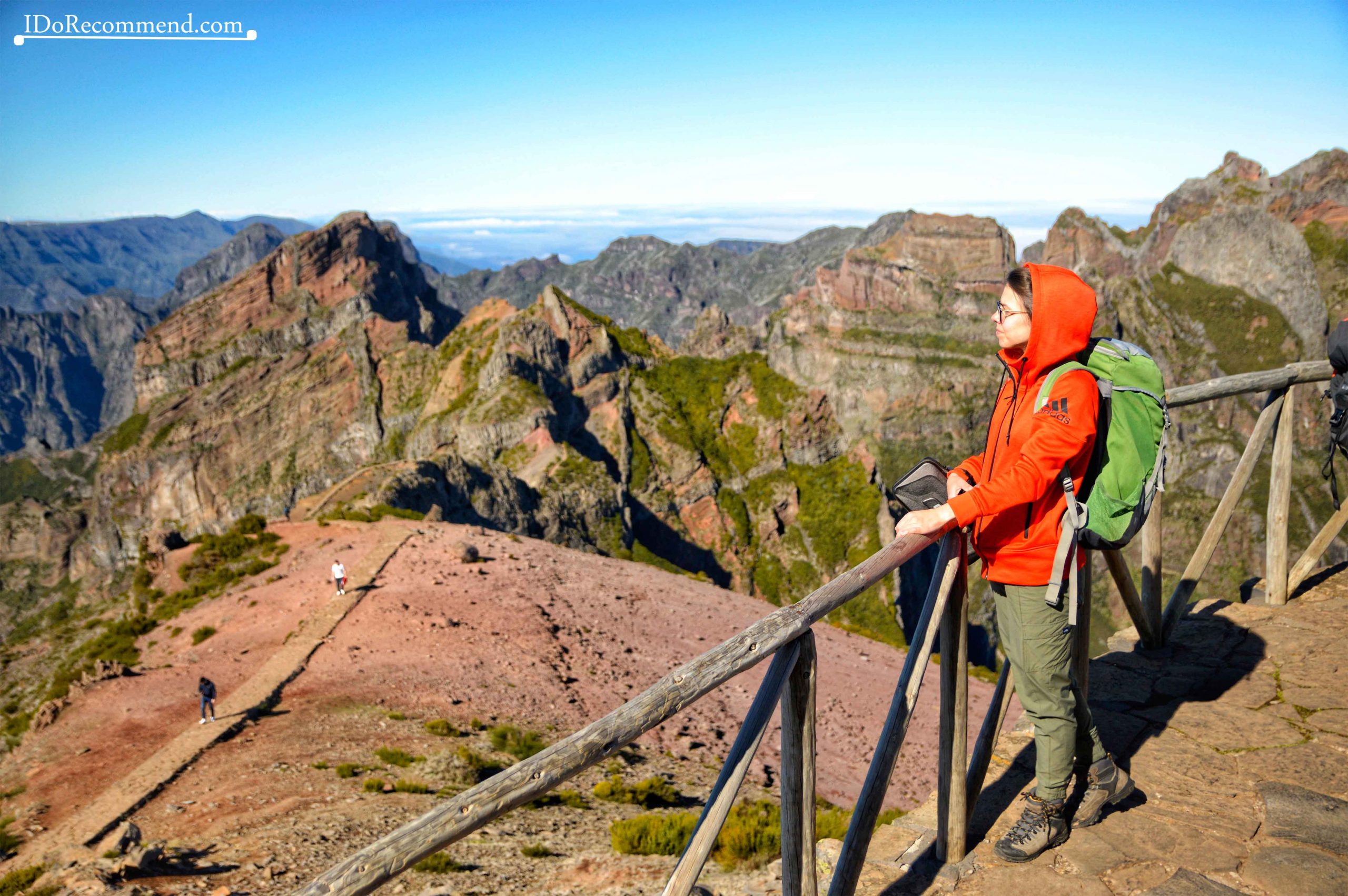 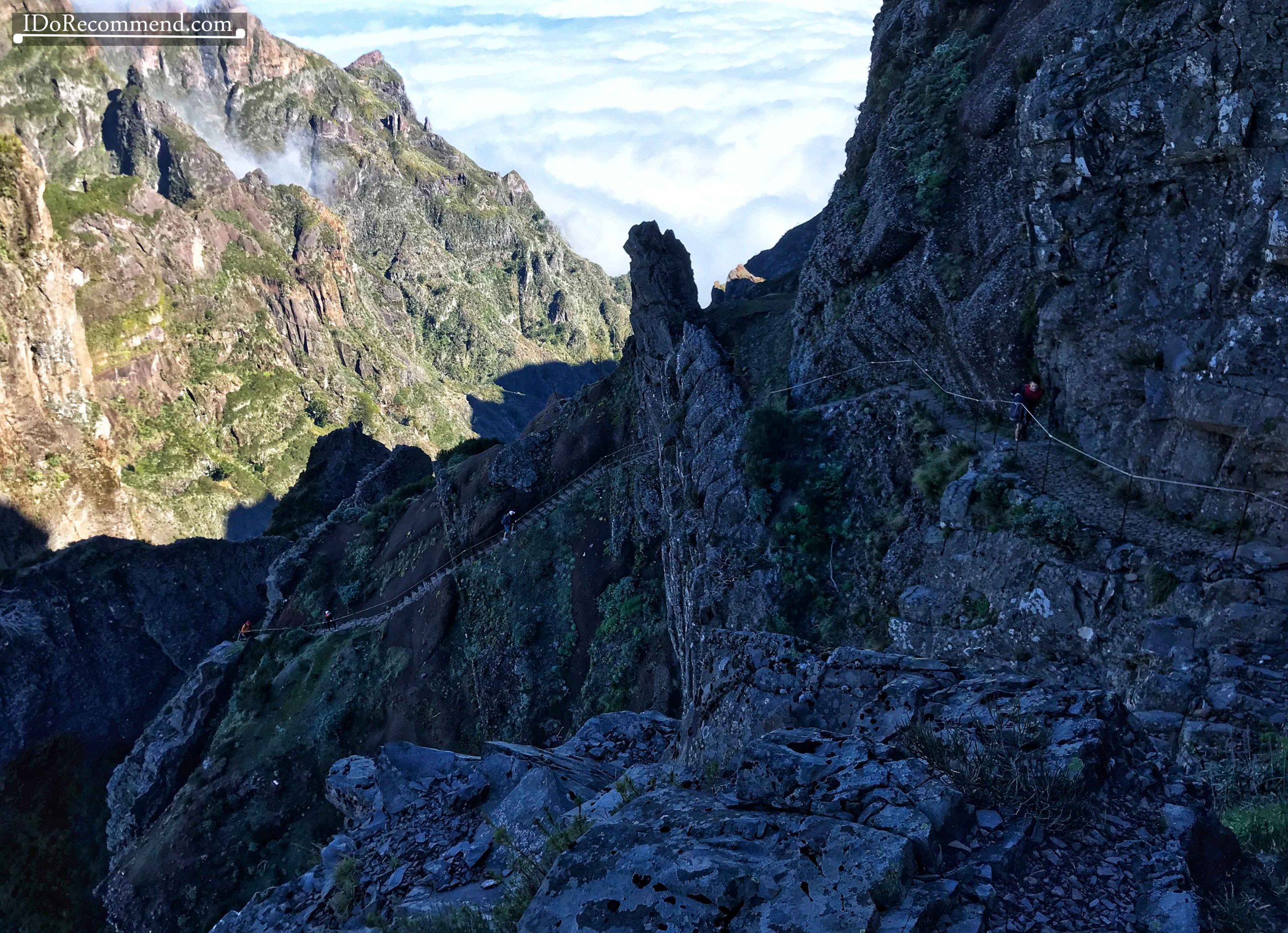 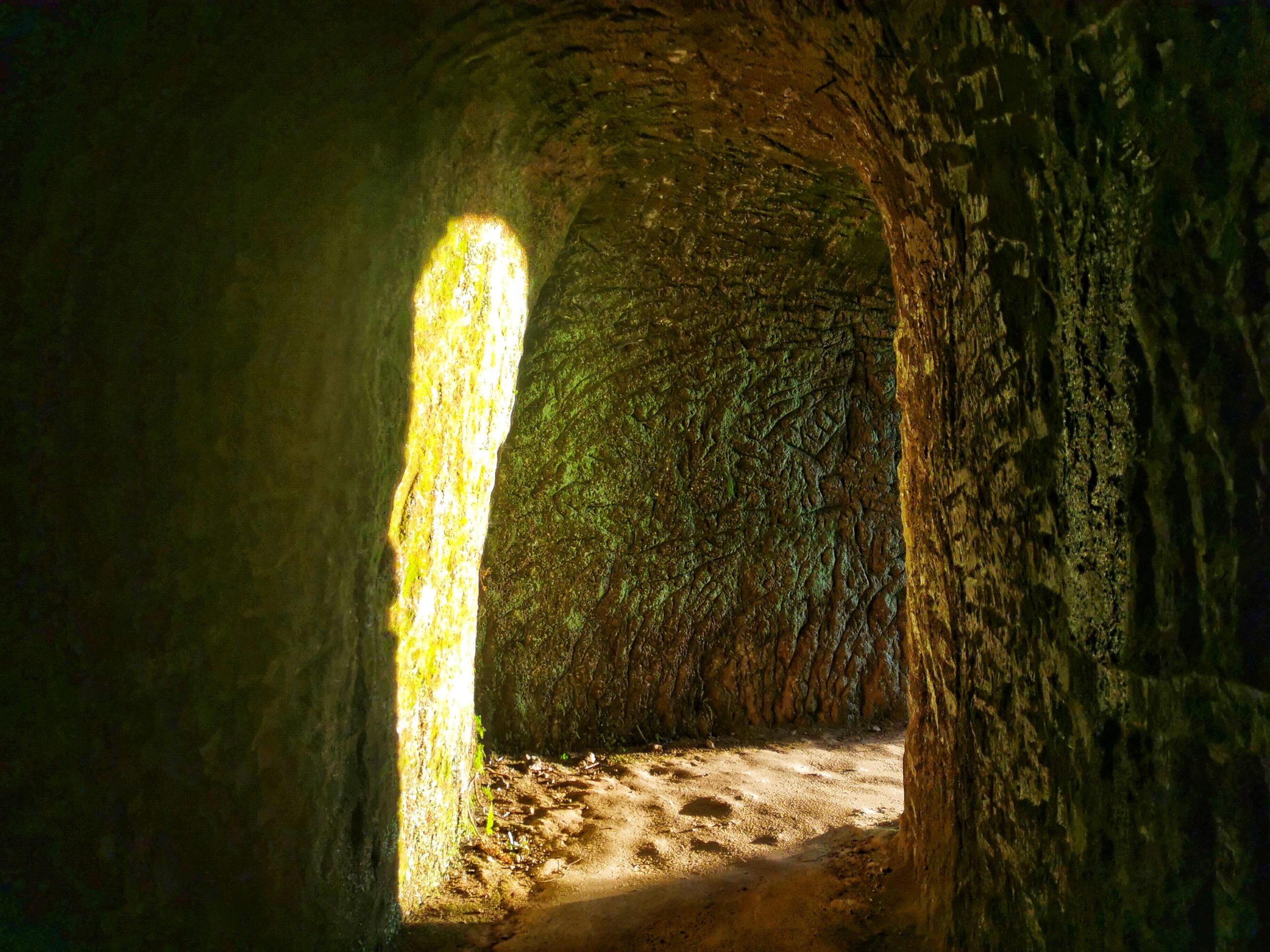 There wasn’t much vegetation on the trail because it was the winter season. The mountains were sometimes covered by herbaceous vegetation and small plants like succulents which gave them a splash of color. 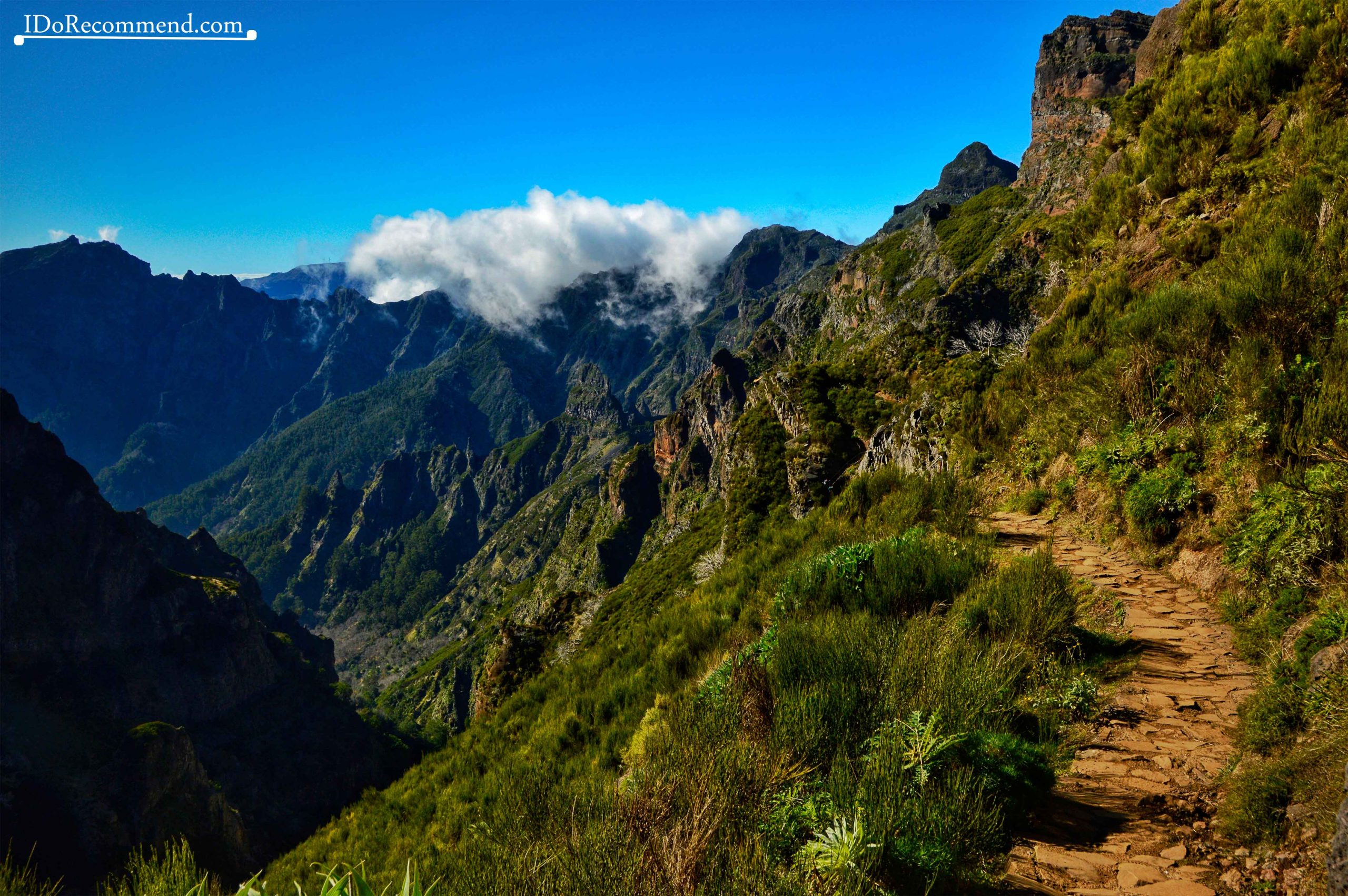 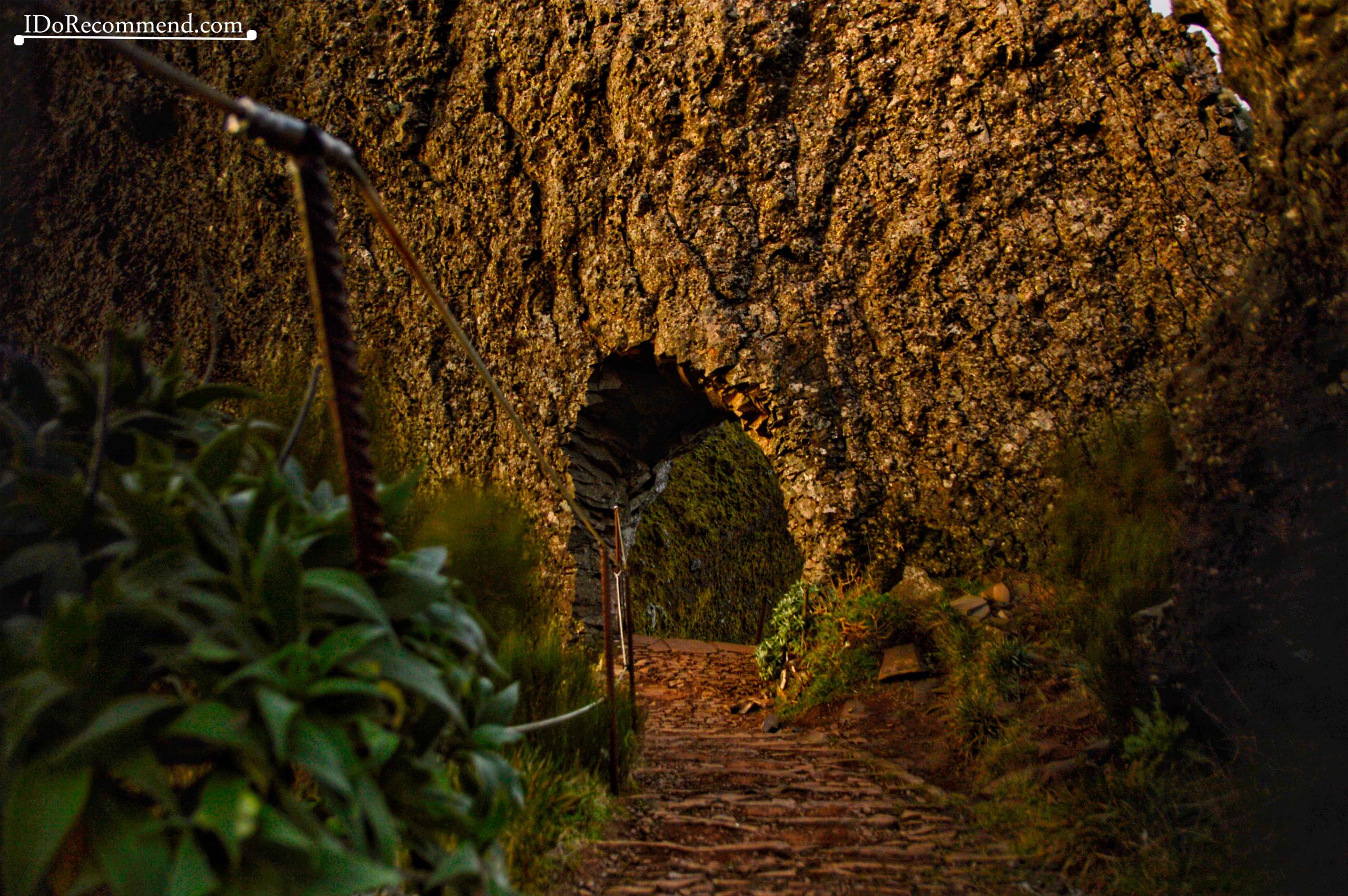 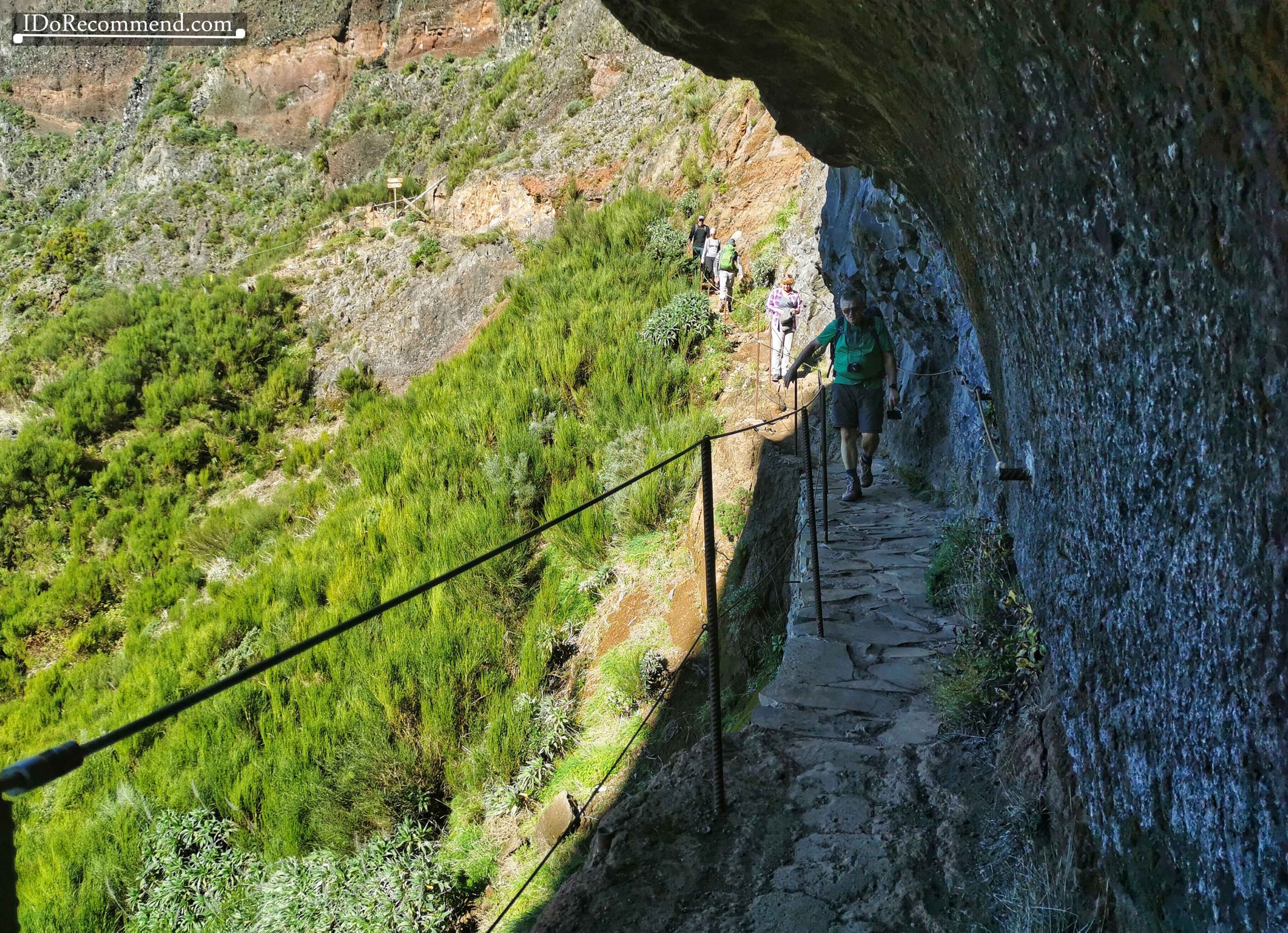 After passing by Ninho da Manta and Pico do Gato tunnel, the landscape changed and we arrived in an area with dry trees. Their white silhouettes and the clouds covering the surroundings gave the landscape a mystical aspect. It was the place that I liked the most. The weather changed in a few moments. The white branches arched over the stone trail, leading us very close to the mountain peak. 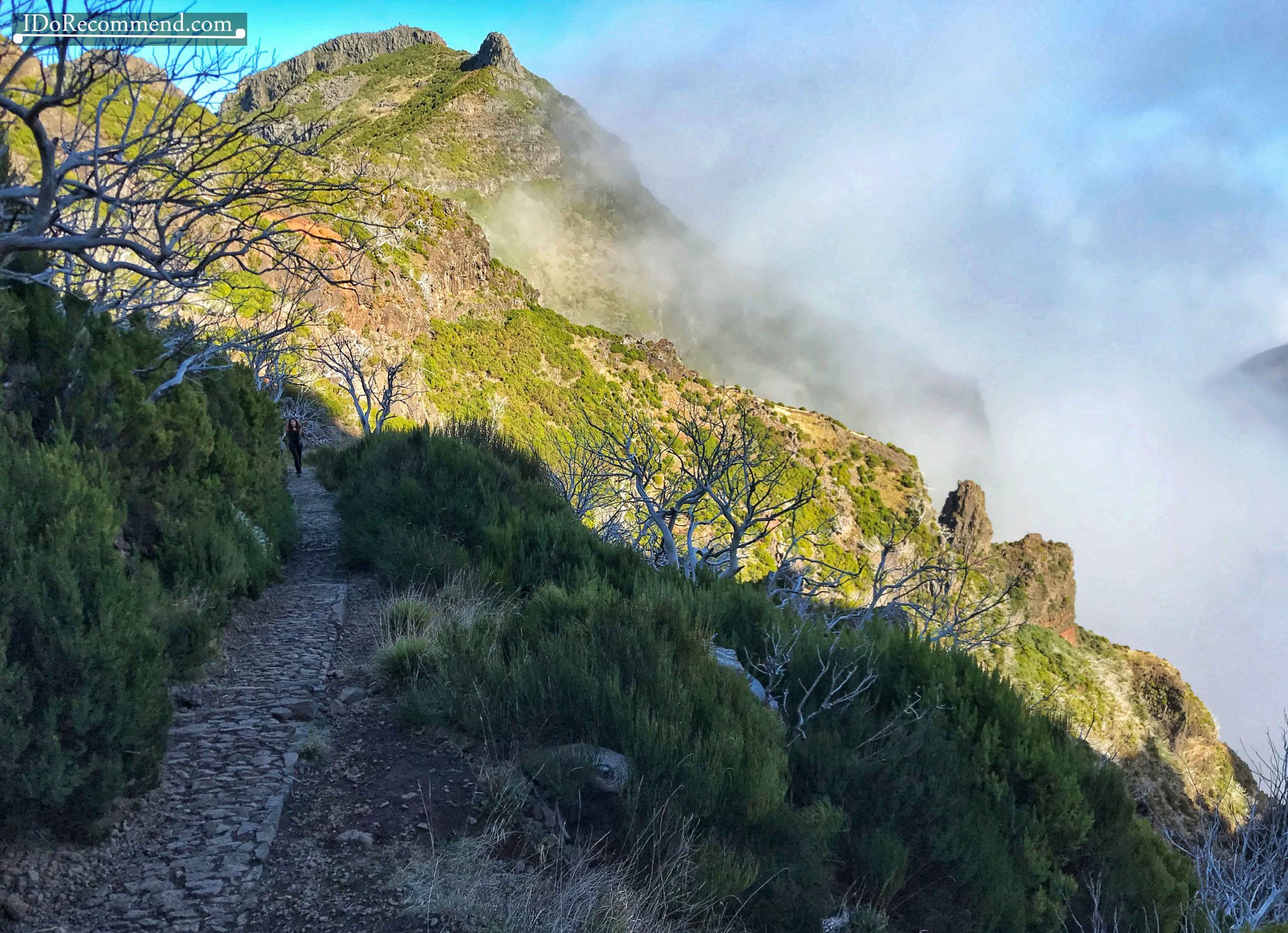 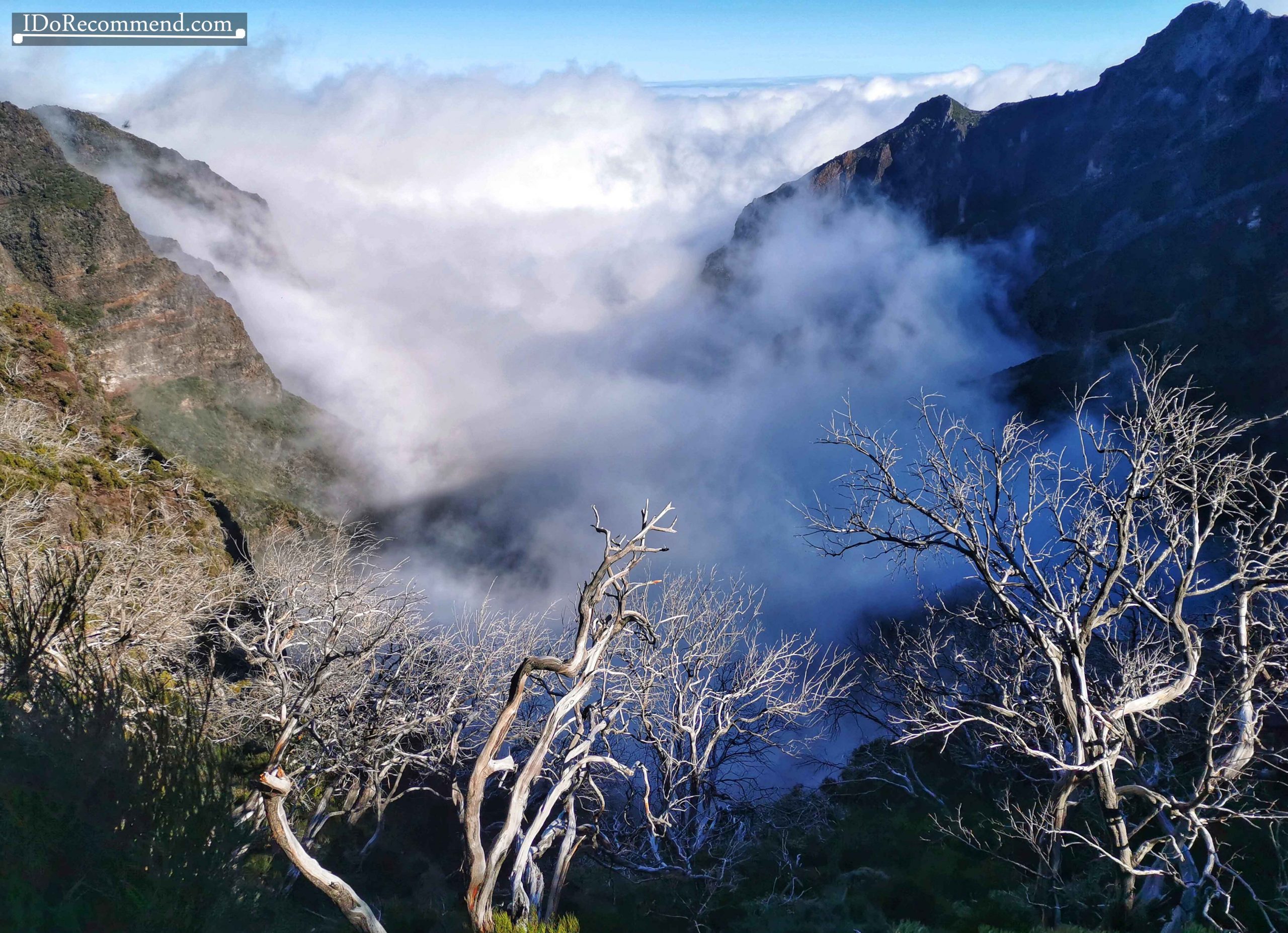 We initially arrived at a chalet located at 0.5km/3.1mi from Pico Ruivo where people can spend the night. We were hurrying to reach the mountain top. 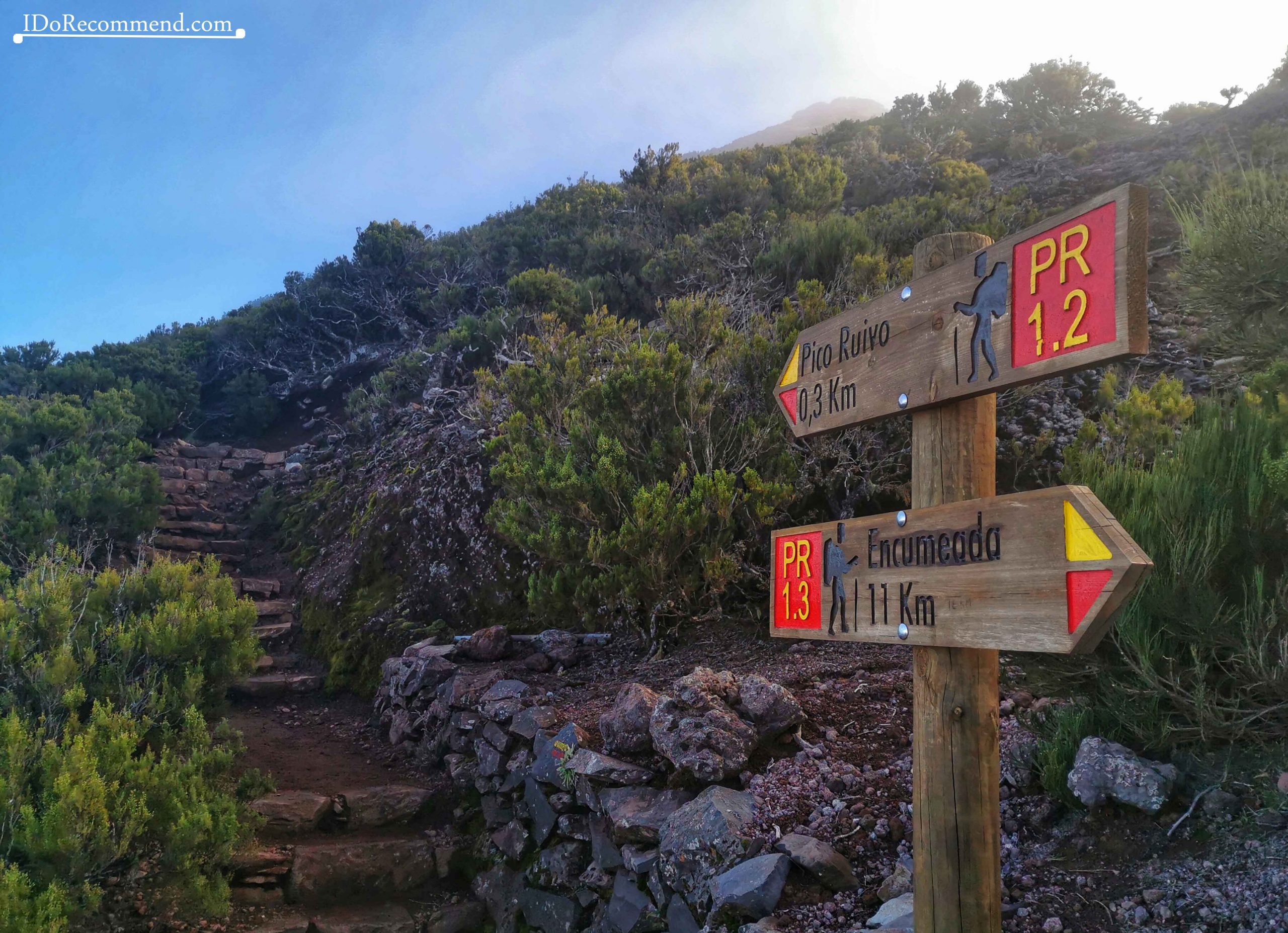 On the summit plateau the cloudy weather didn’t allow us to see much in the distance, but we witnessed the Glory phenomenon. It is an optical phenomenon that consists of projecting the shadow of a person or object on a cloud or foggy area. 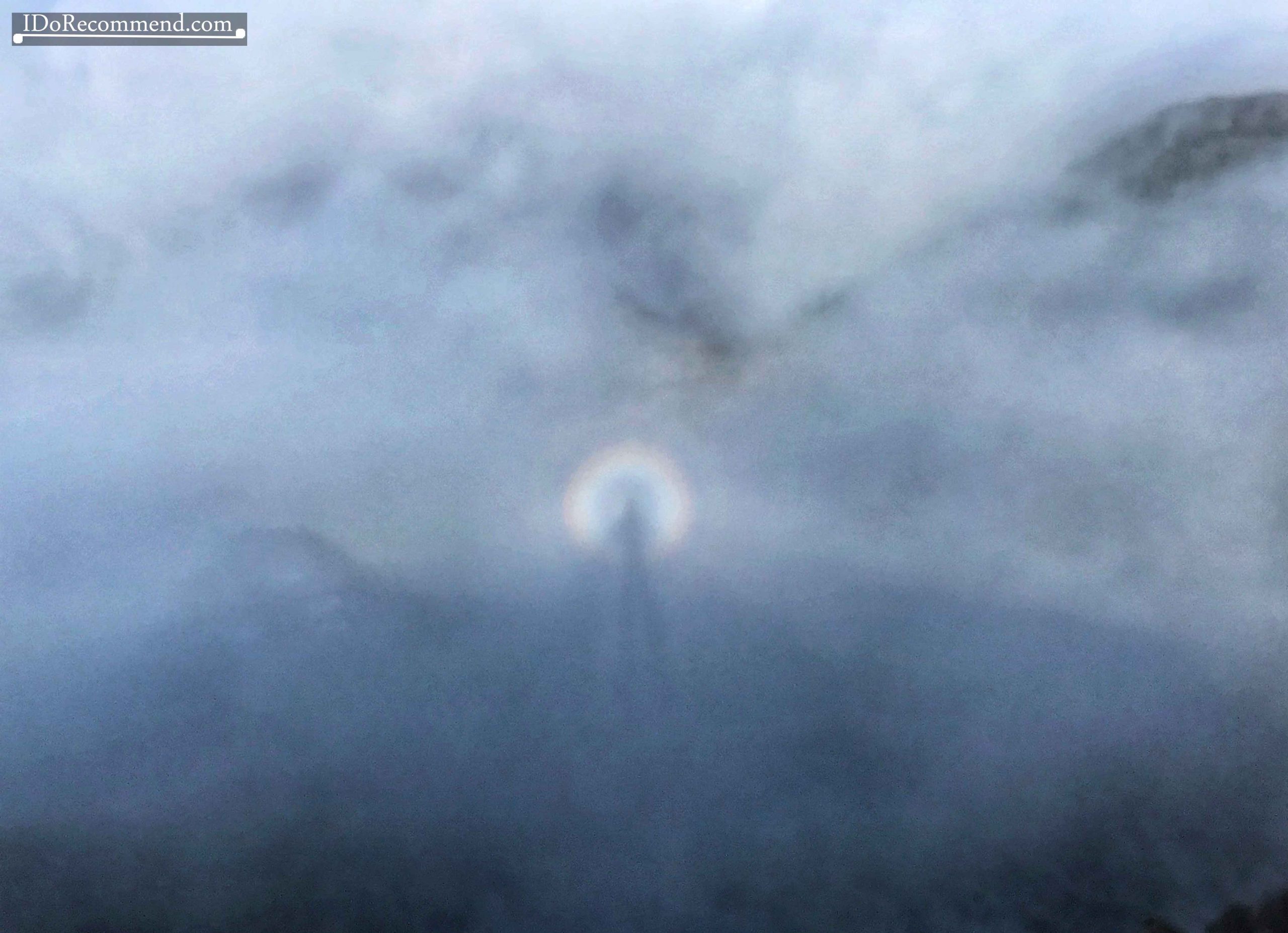 In a few moments, everything became white around us and it started drizzling. We hurried up down the valley, hoping to find some warm food at the chalet we had passed by one hour before. It was disappointing not to find something good to eat at the chalet, so we went further. For more than an hour a light rain accompanied us. We had to be careful because the stones/stairs were slippery. But if you walked carefully, holding yourself onto railing, you were safe. Slowly the sun came out from between the clouds, but it was almost dusk. The light that fell on the rocks was very warm and yellowish, which is why I always stayed behind to photograph the landscape, then I had to run to catch the others. 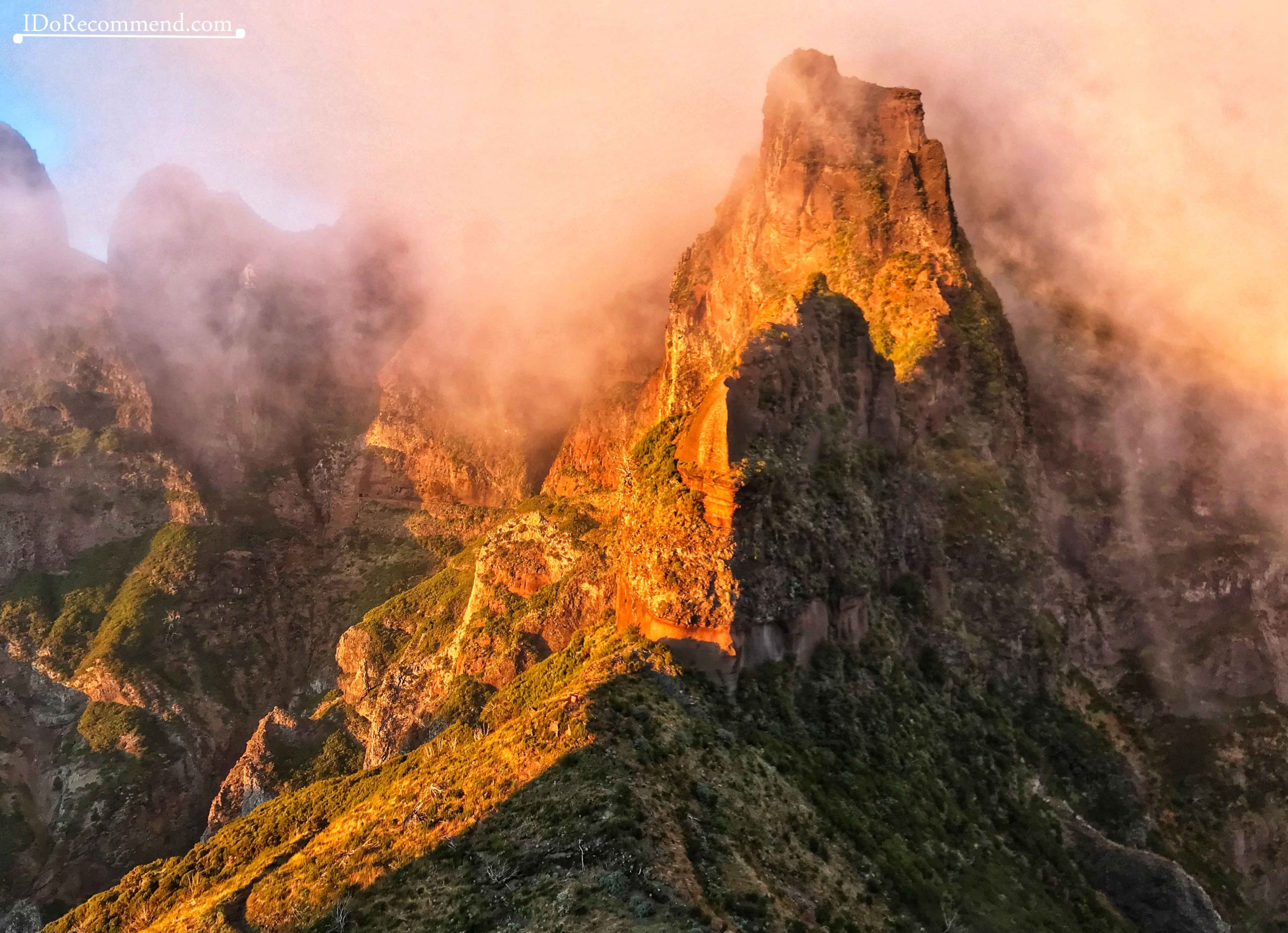 The darkness quickly enveloped the surroundings. The weather was starting to be much colder. The force of the wind could have brought you down if you didn’t pay attention. The temperature felt like 0°C/32°F and we had to use the flashlights to make sure we walked safely on the trail. 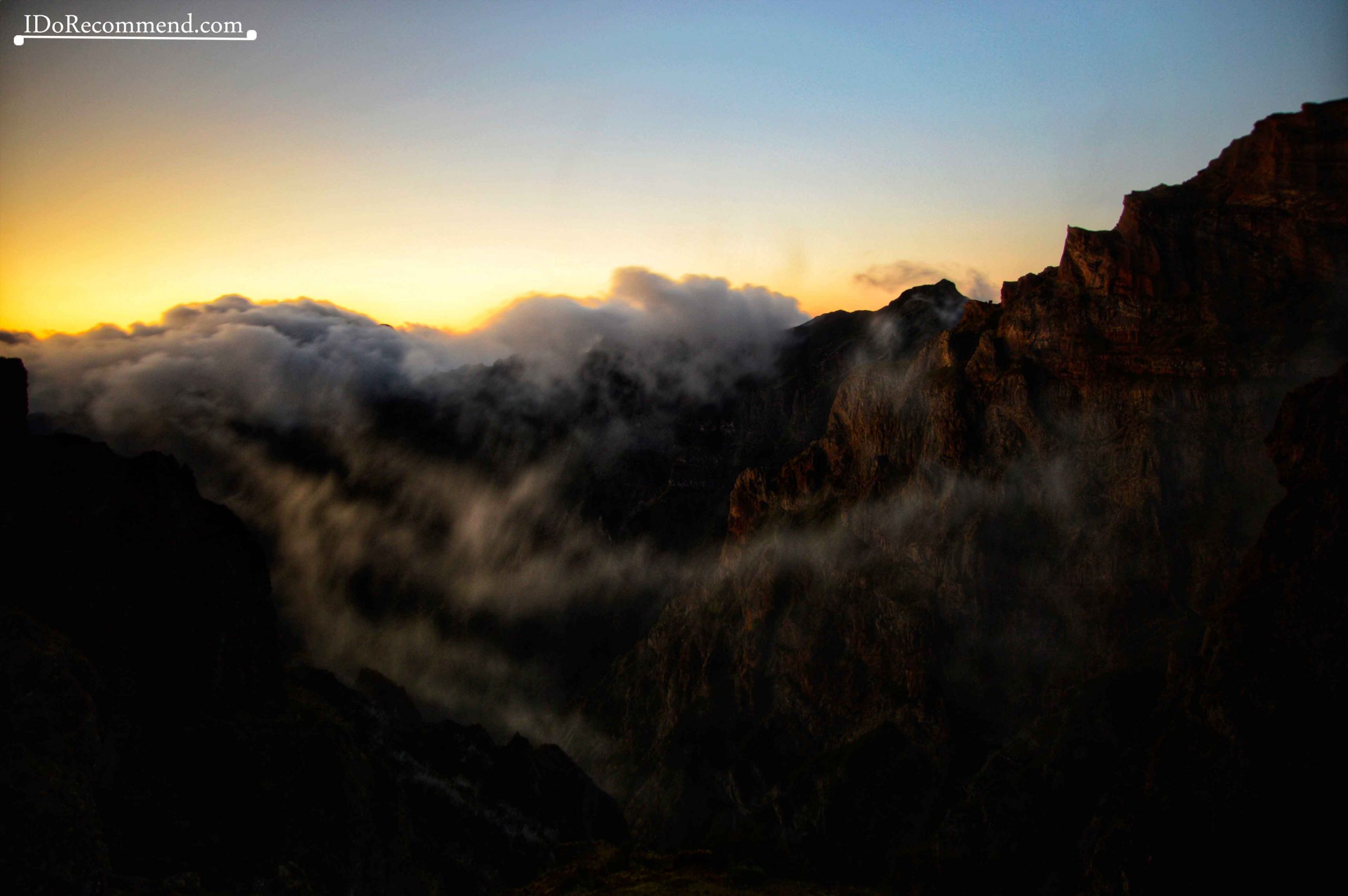 Finally we got back to the car around 8pm. It was already night and the stars were shining in the sky. We were the only ones in the area at that hour. The thermometer from the car indicated 7°C/44°F even though the real feel was much lower.

That was by far the most intense and the longest day spent in the middle of the nature in Madeira. After the strenuous hike we had dinner at Taj Mahal Restaurant in Funchal.